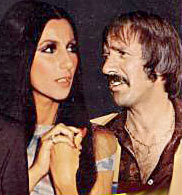 Over the holiday weekend, we got a lot of wedding stuff done. I think I’ve found dress I like and can afford, we ordered our cake and met another florist. Still have two more florist meetings to go before nailing that down.

In the meantime, I’d like to talk about something that has bothered me since I was a wee child of 7 or 8 years old...as evidenced by the Sonny & Cher Show duet with Sonny & Cher singing "You Make Me Feel Like Dancing." Yes, it’s been something I’ve been harboring for quite a long time but as yet un-uttered.

As giddy as Tinkerbell as I was that S&C were back on the air in 1976 after their divorce, I can barely explain the level of my frustration over the intrusive Laverne and Alvie (or was it Alvin?) sketches that interrupted each opening duet. Grrrrr!! I would think, every time this misforunate thing happened, which was almost every freaking week.

So it was bad enough S&C were not yet re-married and that now on top of that the viewing hour of the new show was past my bedtime due to our family moving from the Mountain to the Central Standard Time Zone which resulted in quite elaborate negotiations with my parents in order for me to have a one-week-exceptionary-later-bed-time-hour, (which would actually come in quite handy the next year when the first Solid Gold special ran late), and I could then still watch the new S&C show, political maneuverings that would impress even our Secretary of State, Hillary Clinton, by the way…add to all that the fact that this lame modern saloon skit interrupted the festive and heart-warming opening song every week, like a reminder that paradise was not well and Sonny & Cher were not eternally duetting on stage blissfully but in reality un-married and wasting away in some bleak hotel bar slugging back wiskey sours...and you can see why I turned out the way I did.

This song is the worst offender that I can recall. Probably I feel this way because when I was 8 years old I loved this song – loved it enough to buy the 45 when I was 15, a 45 that only languished in a shoebox because I grew up to find Leo Sayer grating.

This duet irks me every time I watch it. Here is the video where some kind, agnelic, hero-type has spliced the song together without the skit.

You’d think this would bring me peace after all these years, but somehow it doesn’t.

I hated those beginning song interruptions also. And that Mother Goose fiasco was a sad replacement for Vamp.

I agree about the song interruptions, which they started on the last 2 years of the S&C Comedy hour... I always hated them interrupting the flow of the song, because, i would usually record the songs from the shows to listen to over and over again.

I, also, think as for the music: S&C sounded more full, well-rounded vocally on the 2nd show, but, they seemed to hold back when it came to singing, esp. CHER, so that it seemed to sound bad, not better. Or maybe they were sending their voices through some kind of filtering system.
THE DUETS were "bad" great!!! I liked them, but they should have put more into their performances..
The comedy on the 2nd show
SUCKED.........
Jimmydean

Ok...the comedy...don't get me started there. That's another couple of blog entries. I've paid off two lifetimes of bad karma watching endless Ted Zeigler muggings. Why did we have a smaller and less talented staff of regulars in the second show again?

ALSO,
i think we have to acknowledge the FACT that by the 2nd show, the sound of popular music had changed into Disco and such???
Sonny&Cher always dueted on the current songs of the time... in the early "70's
it was still THEIR STYLE of
music... by the 2nd show------ IT WAS NOT THEIR STYLE OF MUSIC...
MARY, you really should get all those dvd collections from that guy in Hawaii... it has so many great musical and comedy moments....

Don't worry. I got more than enough S&CTV.