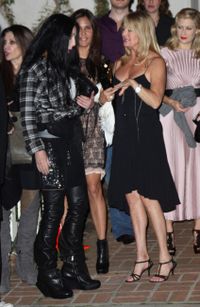 Paparazzi pics came out there last week showing Cher shopping at Barneys in Beverly Hills. Much ado was made of her sunglass postures. Ugh. So stupid. Must have been a slow celebrity fashion news week to warrant this. I don't want to repeat the 80s with our hyper vigilant sunglass posturings! Nicholson, Cruise - you know who you are!

Cher was also seen at a party chatting up Goldie Hawn at the Slumdog Millionaire/ The Wrestlerawards party in Los Angeles. Much ado was made over her “bondage-style PVC thigh-high boots,” sequined skirt, plaid shirt and red eye shadow. 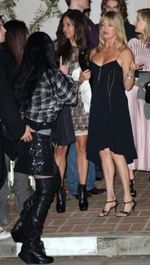 Look at this picture to the right. Is someone grabbing Cher’s ass again?

Cher was also out trying to save Billy the elephant last week. I had to catch up on this somewhat. I’m embarrassed to say in my former life I was an animal activist (yeah, I did a march or two) and aside from not eating meat or buying leather and contributing to my favorite animal organizations (Farm Sanctuary and Animal Legal Defense Fund), I’ve been out of touch recently.

Farm Sanctuary got me started as a vegetarian in college after seeing their film on factory farming. Animal Defense League sends lawyers in to stop animal abuses and enact change through the court system – and they’re surprisingly effective.

See their cat mascot? Who can say no to that cat? I’m telling you, they’re playing hardball over there.

But back to Billy... 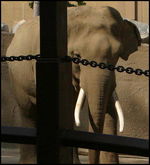 In a nutshell Cher, Bob Barker, Lily Tomlin, Tippi Hedren, and Kevin Nealon (who I was once on a plane with from Kansas City) were among the many who last week went to a Los Angeles City Council meeting to show their support for stopping an expansion of the elephant exhibit at the Los Angeles County Zoo which currently houses only one elephant named Billy. The Council voted 11-4 to continue the expansion at $46 million dollars. Keep in mind the state of California is practically bankrupt and threatening to cut school buses, shut hospitals and stop road construction for lack of money.

LA Zoo keepers apparently maintained that all zoos have elephants. Uh, good point. Let's let the gorillas go, too. They get depressed as well. In fact, Zoos suck now that you mention it, zoo keeper. Animal activists have (for decades) maintained that animals get poor care in zoos and have shorter lifespans due to depression and illness. It’s bigger than the elephants but I suppose you have to start somewhere.

Cher said, "It doesn't make it right because we've had other things we're ashamed of. We had slavery and you know, it wasn't right." exceeded it, Council President Eric Garcetti asked her to wrap it up. But she continued. I don't think that's such a rare occurrence at those things.

But after Cher spoke, standing among the throng of everyday Joe's (it looks unusual, doesn't it?), Lily Tomlin, Tippi Hedren, and  Kevin Nealon spoke. Their arch enemies in the fight were zoo supporters Betty White and Slash, formerly of  Guns N’ Roses.

Maybe we should sick the Animal Defense League on the case. I don’t want to see Cher and Betty White come to fisticuffs. 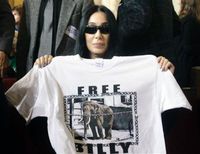 Zoos suck, y’all. The only “good” zoo I’ve ever been to was the Bronx zoo which has huge sanctuary like exhibits but even so...not a great life for the furpeoples. San Diego was a major disappointment, too, for a supposedly world-class zoo. Circuses are even worse. Don’t go to a circus that has animal acts...or zoos.