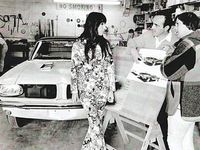 Cher also gave a short interview recently. Ah, how I yearn for a lengthy People cover.

In the latest, Cher talks about her hopes for Billy the Elephant (freedom), her latest charity work (kids in Africa and Tibet), briefly about her new album (more guitars), and shopping at Target and Michaels to get paintbrushes for the teamsters to paint teapots for their mums.

I’m looking forward to my second trip to see the Vegas show in March.