You Make Me Feel Like Interrupting
Iiiii am Everyday People

Just when I was thinking very little information seemed to be coming out about Cher’s second-year run with her Las Vegas show (I still pinch myself sometimes thinking about being able to go to Vegas and see a Cher show, btw), including a dearth of information on new Cher Store items. I mean, what treasures have newly appeared from the mines of Cher Mountain? Any new songs or outfits?

But then on CherGroups, information started to trickle in this week. Cher sang "Love Hurts" (allegedly replacing "The Way of Love") which feels like a good change, all in a new getup and one that I actually am thrilled to see because it’s reminiscent of her “More Than You Know” fit from the Celebration at Caesars and Live in Monte Carlo shows at the turn of the 70s/80s.

It's got such a retro-yet-spacey headpiece.

After “Walking in Memphis,” Cher also sang “Let The Good Times Roll” and she sings it just like you’d think she would.

For this and other recent espionage clips of v2, visit the fabulous Cher World: http://www.cherworld.com/news/?p=702

One fan also said Cher fell onstage after “some drunk guy” threw his straw hat on stage for “Turn Back Time.” She fell on her knee due to tripping on it. Rumor has it security may ban sailor hats in the Coliseum.

Imagine no hats for Turn Back Time! But...then again who knows what some wacko might try to stick inside a sailor hat.

Cher was also on Entertainment Tonight talking about the show (pic above).

I can’t believe they’re still talking about her health. Didn’t we clear up that rumor on the last Entertainment Tonight episode a few months ago?  Cher further clarifies that she does indeed see the doctor who Farrah Fawcett sees for treatment of cancer but Cher goes for a completely unrelated issue.

Anyway, Cher looks great in this interview. You know I love the cowboy hats (see the cowboy hat photo gallery) and love the earrings. Cher is animated, beautiful and relaxed. Great to see! 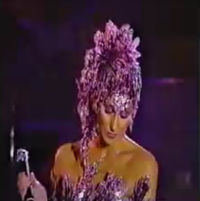 To the left is Cher's previous More-than-you-know-fit.

The interesting thing about "More Than You Know" is how many times Cher covered it in the 70s and early 80s. The version I grew up hearing was the up-tempo Bittersweet White Light version but I grew to like the slower, torchy version better.

Here is Cher singing "More than You Know" for her TV special...with her hair tied up in a tree and a wild cat on set. They just don’t do stunts like that anymore.

Buy the way, one of the things that got me sweet on the wedding dress I picked out what the fact that its sequins sparkled in the lights like Cher's TV show-fits used to do. Sigh.

Now that I look at her leopard suit from the clip above, I think it looks very Dr. Seussian...almost like a Thneed in fact.

Here is the Monte Carlo version of "More Than You Know:" http://www.youtube.com/watch?v=Qqc4-3jxyEg

Here is a compilation of reviews of Cher's Vegas shows year one: http://govegas.about.com/od/cher/Cher_Cher_at_Caesars_Palace_Las_Vegas_Show_Review.htm

I thought I was awake and on my third cup of coffee, but clearly I am still sleeping (and having one very weird dream). How else to explain that I just read on your lovely blog that Cher is now singing a Caesar and Cleo number ("Let the Good Times Roll") in her Vegas act?

Boy, am I going to be embarrassed about this once I wake up.

Robrt, You are RIGHT! I knew that song sounded familiar for some reason. But I figured it was just residual memory of the time in the early 90s I had to drive my parents cream colored Monte Carlo to school and it only had AM radio...so I was forced to learn the words to songs like Band of Gold. I still really don't get the plot of that song.

Being a Cher buff such as yourself, maybe you would know when the next Cher concert dates will be posted and on sale. So far she only has dates scheduled until the end of May. When do they usually post the next leg of shows? Going to Vegas in Sept. for my 30th bday!!!