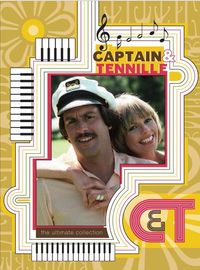 For Christmas, among other things (like the awesome Carol Burnette "Went with the Wind" doll), I received a collection of the Captain & Tennille variety show episodes which aired on ABC on Mondays from September 1976 to March 1977.

I can’t help but compare this show to The Sonny & Cher Show running at the same time. In the episodes I’ve seen so far there are far less skits on C&T and more musical numbers, sometimes more experimental (there was a word jazz segment with Penny Marshall, Tennille and Ron Palillo –Horseshack- and Lawrence Hilton Jacobs -Freddie Washington- from Welcome Back Kotter which was good) but for the most part the show is heavy on Tennille singing alone or with musical guests, including an amazing duet with Dionne Warwick. The Captain actually speaks on the show and is actually pretty charming and has good comedic timing. I like him. They’re talented to be sure. And I do love variety shows, pretty unconditionally, including this one. Trouble is, the show lacks something sparkly that S&C had, despite all the required rhinestones on Tennille’s dresses.

And in the premiere episode they go through a long joke setup with Jackie Gleason, mistaking each other for other iconic celebrities of the time culminating in Gleason confusing them with Sonny & Cher. Which was probably the big elephant in the room. “We’re not Sonny & Cher” the joke seemed to say.

Which is something all new variety seems to feel compelled to say, especially if co-hosted by a man and wife. Nick and Jessica Simpson were emphatic before their TV special a few years ago -- we’re not trying to be Sonny & Cher.  Sharon and Ozzy Osbourne also recently declared their new show would not be a new Sonny & Cher. It’s kind of a back-handed compliment. They’re saying simultaneously, we’re not trying to copycat what has become known as the standard of couple-variety shows and we intend to be much cooler than that.

And that’s the fascinating paradox of Sonny & Cher. When they hit town in the 60s, they were hyper-cool, then in the mid-60s they were perceived as waning-cool. Then in the late 60s definitely not cool due to their anti-drug stance and the changing musical culture. Back on TV, they were cool kinda but not cool kinda because older people were now watching them.

And the reality of it was, compared to other couple and non-couple variety shows, they did put off an air of coolness. You see this when you watch Captain and Tennille, who are very talented but lack that elusive IT factor.

Tennille is hyper friendly, smiling that big showbiz smile and leading forward toward the audience with wide eyes, all which works against that reserved “coolness” Sonny & Cher slyly cultivated. Also, Tennille, who thankfully traded in her big mumu shirts in early shows for slinkier outfits in 1977, still doesn’t physically ooze sex appeal. My bf remembers watching Cher and thinking she was hot; but we both watched Captain and Tennille and had a hard time even imagining them having passionate, sweaty sex together. I’m not saying they don’t, mind you. I’m just saying it’s not fun to go there as a viewer.

Also the stage layout breaks apart their intimacy of body language. The Captains’ piano stands between them so all Tennille can do is make eyes at him and gesture toward him. Kinda cold, dude. She can’t bump hips with him. He can’t play with her hair. No kissing. It’s flat.

So we can agree then. They’re no Sonny & Cher. The Captain and Tennille show didn’t break any nelson records and it didn’t last. The new Osbournes variety show (as my operatives who’ve attended tapings maintain) won’t be very successful either. Sonny & Cher succeeded. These other guys failed.

And right from the beginning, these couples were clear: they would not be no stinking Sonny & Cher.

Posted at 11:49 AM in Scholarship In Action, Television | Permalink | Comments (0)