A New Movie
Elephants and Parties

The 1975 S&C Press Conference & the Inauguration of Barak Obama

How do I even compare these two events, you ask? Well, they were both intense periods on an axis of history, a great shift in hope. In one we left (or thought we were leaving) the era of David Geffen and Gregg Allman. In another we left the era of George Bush. In one Sonny & Cher announced they were reuniting (for television) and in our blind desire for a personal reconciliation, there was a media frenzy...and in the other we have a similar (some say blind) desire for a national reconciliation resulting in an Obama media frenzy.

So okay, the Obama thing is bigger. I get that. I was VERY excited when Obama was inaugurated a week ago. I took the day off to experience this important American moment in history and I was none too proud. I gleefully gave Bush my own private heave-ho and I enjoyed seeing all the first-day protocol of the new President. Can’t say how heartening the day was, including the balls.

Was Cher there? With all the people crowded on the National Mall, I didn’t happen to see her. But the press reports she was indeed at one of the evening's celebratory balls, not one of the ones Barack and Michele attended, but the Feeding America party.

(By the way, I say this to anyone who will listen on a daily basis: I LOOVE Michele Obama. Sort of like I imagine my mother loved Eleanor Roosevelt. With absolute adoration.) 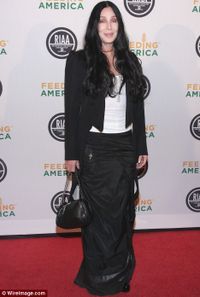 This is Cher at the Ball

At the ball Cher expressed admiration for Obama to OK Magazine:

"I just want to see him be as smart as he is and I believe his intelligence is so great and he will do as much if not more [than people expect of him]".

"He is totally the right person for this position. He brings something more in his spirit and there is something about him that instills trust in me." "The Republicans nearly killed me!," she added.

"My spirit is renewed, this is such a great time to be an American!"

"Republicans: why would you want to be one, especially if you’re a minority?," she said. "I wish they would go somewhere else."

Yes...it was all so very exciting. It was also so very exciting this week when a Cher scholar emailed me this link to the S&C press conference of 1975 with the hilarious accompanying commentary: “the infamous 'pale-faced, pregnant, getting low ratings and needing Sonny to come to her rescue' press

conference!” Oh so snarky but true, I suppose. Do you think she’s attempting to detract from those pesky little issues with that smartly tied neck scarf?

When I moved to LA I was intrigued to find out this conference took place at The Beverly Hilton (at the corner "V" of Santa Monica and Wilshire Blvds), the same hotel owned by Merv Griffin and the site of Cher’s famous auction a few years back and the historic location for The Golden Globe Awards andthe building that housed the fabu tiki lounge Trader Vics. I had seen the still photos (S&C both in white outfits behind a podium) but never thought I’d see the live action footage. What a thrill for this S&C nerd.

But I can’t tell you (although the media mayhem in the video clip probably can) how happy Americans were that Sonny and Cher were reuniting. Not only did we have fantasies of a much larger reconciliation (after all they’ll be spending long hours together again) but the chaos of the Geffen/Allman/Sonny’s-solo-show all seemed behind us finally.  Cher just didn’t seem as happy on her solo show despite all the “hang back and stay loose” declarations she made from that long tongue of a stage (Sonny’s description of it).

Heaven knows, we sure weren’t happy.

So what that we were all wrong and that Cher still had another year with Gregg Allman (inlcuding another People Magazine cover) and then would spin off to Gene Simmons and a long line of fuzzy-faced gentlemen. I think it’s telling that the first question asked by a reporter was personal: are you getting back together romantically?

Oooh we wanted it. We were all the heartbroken kids of this broken marriage.

The press frenzy is important to note: look at them scrambling around in their tweed jackets, long scraggly 70s hairdos, side-burns, and outrageously clunky cameras. All this hubbub ensured that the premiere of the new Sonny and Cher Show on CBS would be one of most watched TV premiers in television history, an accolade the show held for quite some time (up there with the answer to the Dallas cliffhanger Who Shot JR?).

You can hear S&C banter before the conference starts, giving a glimpse into their relationship, making cracks with each other as the press squawks at them. The footage has strange cuts in it and is mostly of the media scrambling but you get a good sense of the crazy mood of the event.

My favorite part is Cher’s last prophetic words as they walk out of the room:

“We won’t be going back to Vegas!”

HOW FAB!!!! esp. since you compared it to the PREZ election... I say that, because as you know, I recently, received lots of cool songs, skits, and monologues from the S&C tv shows---- AND, one of the interesting things I kept hearing were "Political Joke" either between them about the "then" current '70's Administration or at each other or their guests... THERE is even one monologue, where SONNY is telling CHER and the audience about his dream of becoming PRESIDENT of the USA!!!!(little did we know that years later.......?)

I remember the press conference and the VERY FIRST SHOW( which was probably the best one they had those whole two years).
I was thrilled!!! like my own divorced parents getting back together or us moving back to my old school and house.( I used to always have dreams about that happening.)
BUT, everything seemed so
NOT happening... even the songs(solo and duet) had no life or energy in them....
AND,
didn't S&C tour during those last 2 years??? i thought so....
Jimmydean

i remember seeing the conference on Good Morning America(remember Rona Barrett???)
AND, it was, also, on the evening NEWS...

ALSO, I just read portions of Barbara Walters' "AUDITION". She wrote about her years at Sarah Lawrence College.
SHE, also, told that when she went to ABC Evening News with Harry Reasoner..... She wrote:

"Then there were my television colleagues. Everyone from Walter Cronkite to the head of CBS
News to sportscasters was
clucking away about the million-dollar death of journalism. "Is Barbara a
journalist or is she Cher?"
asked Richard Salant, the president of CBS News. Cronkite echoed his boss's views, claiming he had experienced "the sickening sensatiion that we were all going under." But you know what? Almost every television journalist, including Harry Reasoner walked into his boss's office, demanded a raise---
and got it. Well, you're welcome." as quoted by Babs herself. she mentions the Cher reference twice in her book, AND, then writes about Cher herself in the celeb section.
Jimmydean

ONE MORE THING...
Everyone, well, 1/2 of everyone, esp. the men
said they had no interest in S&C and always made fun of me for being a fan..."They said I wanted to be Cher." Need I explain that remark???

BUT they were always the first ones to turn up the volume of the AM radio stations and run to the TV when S&C appeared...

ON that Fateful Sunday Nite,
EVERYONE of them were piled in the livingroom waiting for 60 Minutes to end and the S&C Reunion to begin..
I had to sit in the floor...
Jimmydean

You're welcome for the press conference link, Mary. I was actually made aware of it by another Cher scholar.....my dear Cher-fan friend, Tom.