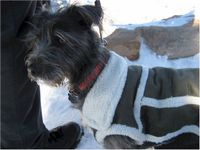 Things have been a bit hectic lately and I’ve had trouble getting back into the swing of the day-to-day. My bf, the furkid and I went to Flagstaff for Christmas to kind of hole up...with some snow. It was much fun – our furkids first snow. We lavished him with Christmas gifts, which included a bounty of rawhides shaped like Christmas items. Soon, he was throwing up on the hotel carpet.

From Christmas to New Years I spent organizing my office. Not pleasant but it had to be done. And now I’ve got a long list of to-dos and touch-bases for the New Year which is keeping me quite busy. Plus the wedding stuff. We’ve organized a website and done drafts of the invitation and found a photographer. Personally, I’m a mess. My skin and hair and nails (and figure). So I’m implementing a beauty and exercise regime for the year. I’m annoyed at how much time it takes to maintain these things. I’d rather be reading.

But enough about me. There are oodles of Cher stuff to catch up on. Here we go – we have LOTS to cover so let’s get 2009 started! 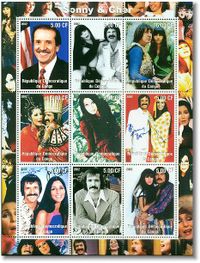 Sonny Palms Springs Film Festival Vision:
Here's an excellent essay from mydesert.com from Bruce Fessier on The Palm Springs Film Festival highlights through the years,  the celebrity drama, the very immediate impact Sonny's death had on the 1998 festival, and the big successes in showcasing some awesome movies.

I actually forwarded this article to two of my film-buff friends because the more I read the piece the more I realized it was an awesome Netflix list of great foreign and independent films of the last 20 years.

Also, it illustrates how important the festival momentum depended on fiscal management, donors, and gala events with red carpet attendance.

And how many films launched there went on to win Oscars:

"It illustrated how the festival circuit begins at Sundance and ends at Palm Springs just before the Oscar nomination announcements."[Fessier]

I had a late-Christmas party last night with some friends (we were all too busy over the actual holiday to meet). We met at West Coast Subs in the Palms area of LA for boba and dinner and this is where my friend Christopher informed me that Cher and Mary Bono Mack were joining forces to petition for a Sonny Bono memorial stamp.

Cher, the one and only, tells us that she is lobbying the U.S. Postal Service to commemorate her late ex, Sonny Bono, with his own stamp.

Cher says she would join forces with Congresswoman Mary Bono-Mack, who was married to Sonny at the time of his death, to make this honor a reality. And the U.S. Postal Service is keen to the idea. One high-up said, “A Sonny Bono stamp would be a lot of fun, especially if Cher would attend the dedication for it.

First of all:  the one and only? – that phrase is dated, pointless and dorkey. By now there are actually many other Chers in the world. I know this because their blog entries clog up my RSS feeds.

Stamps above from the site Stamp Magnets: http://stampmagnets.com/cgi-bin/search.cgi?type=search&search=minor&minor=Entertainers+-+Music&shop=stamp-search&amount=10&num=20

“The Cher Within” which artist Paul Richmond says is “all about embracing our inner divas”.

Our inner divas in lingerie?

There’s been lots of blogging activity on Cher music. And I have to tell you, I love stuff like this. People talking about Cher music.

Heart of Stone: http://boppingelf.blogspot.com/2009/01/cher-heart-of-stone.html - just a quickie overview of the players and perspective on her love life at the time.

The album was recorded in late 1988/early 1989, during the third year of Cher's relationship to Rob Camilletti; She dedicated the album to him. The record is still regarded by many fans as one of her best.

[I’m not one of the many but I would argue that it’s the best album of her Bon Jovi period.]

Love Hurts: http://billsmusicforum.blogspot.com/2008/12/trivia-corner-mr-mister-cher.html -
Info on the players (which is actually pretty impressive list for the time).

Other familiar guests to melodic rockers will recognize the work and backing vocals of Richard Page (Mr. Mister) on the hit track "Save Up All Your Tears" and her duet, "One Small Step". "World Without Heroes" has songwriters as diverse as Paul Stanley and Gene Simmons (Kiss) and Lou Reed, with Steve Lukather on guitar (Toto) and Richard Marx on backing vocals - can you imagine all those folks in the same studio at the same time?

[No, because I’d bet your ass they weren’t.]

The Russian-flavored "Bang Bang," which features some fevered fiddling, was written by Sonny during a lull in the duo's fortunes; though Cher was initially reluctant to record it, it became her fastest-selling solo hit to date. It was soon covered by Nancy Sinatra in a version later used by Quentin Tarantino in the opening scenes of Kill Bill Volume 1; and her father, Frank, made it a staple of his concert appearances, also recording it twice. The song has also been covered by Stevie Wonder, Petula Clark, Vanilla Fudge in their signature slowed-down style, The Jam's Paul Weller, and Carla Bruni, the first lady of France. Cher has continued to perform it in nearly all her concert tours. 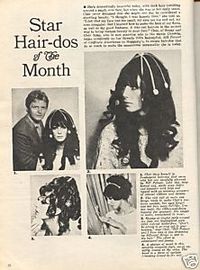 The first was an article of star "hair-dos" of the month which dates back to the 60s sometime. Anyone want to take a guess at the actual date?

As Aunt Mabel might say, “What in heavens name is that on her head? 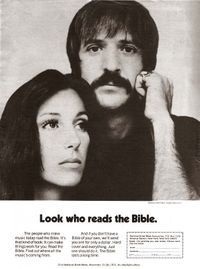 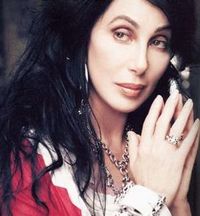 Is this the second stroke of The Cher Cheritable Foundation? Where’s the website? How do I send benjamins?

Cher is working for orphans in Nepal. Here’s the first notice in Las Vegas Weekly: http://www.lasvegasweekly.com/blogs/luxe-life/2008/dec/11/strip-scribbles-chers-mission-mercy-nepals-orphans/

According to Contact Music, Cher decided to fly to Nepal and launch a charity mission for South Asian orphans. This is the second time she has donated time and money for a children’s orphanage in a foreign country. Earlier this year, Luxe Life reported that her last-minute donations saved an African orphanage run by a British couple from going under when funds dried up. Cher also works hard behind-the-scenes on a U.S. charity dedicated to the medical care of brain-damaged children born with facial deformities anywhere in the world.