Cher and The Ugly Duckling 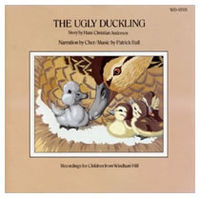 For those who don’t know, Cher narrated a children’s classic on cassette tape in the early 1990s. When I was a little rugrat I LOVED books on tape so it’s a small crime of happenstance that I didn’t have this waybackwhen. I would have worn the tape ribbon to shreds. This is none other than the famous Hans Christian Anderson story, The Ugly Duckling about an ugo duck who grows up to be a swan (you see? that's why he was ugo? he was swan among ducks...he was just different and had to grow up to find his peoples.

This blog talks about her performance:

Cher's rich contralto voice tells the tale of The Ugly Duckling with dignity and grace. Serving as narrator, and also providing voices of numerous characters, it was clear that each voice was developed and purposeful. I found the older voices she performed to be entertaining and most colorful. You could keenly feel the sorrow of the bewildered water foul. Cher did very well conveying his fellow creatures' bitterness as cold comfort in the midst of unfavorable circumstances. ..Cher narrates over some exquisitely beautiful music performed by Celtic harp player and spoken word artist, Patrick Ball…”

Who doesn’t love The Ugly Duckling story right? Cher, as well as some others of us out there, probably feel we can identify with it. I, myself, feel as if I have failed to fully swan. Zen taught me to accept myself as is, my sort of wabi sabi self. So this story has come to disturb me as time goes by because I think as a culture we have typecast all of ourselves into Ugly Ducklings when we feel alienated and we never really feel self-actualized unless we are Swanned (case in point: the awful reality show a few years ago The Swan which carved up all the women contestants to look all like the same Victoria’s Secret model and then pitted them against each other – it was disturbing and it implied the ideas that “variety is not allowed!" and "Ethnicity is not allowed!”).

The Ugly Duckling also asks us to constantly seek approval from others. And folks, it just doesn’t come. Or if it does, it trickles in with too small of an amounts to appease your insecurities, even if you're Cher.

So you have to let go of the desire to get this mythical all-powerful acceptance and that’s the only way you’ll ever find peace. So what I’m saying little duck is, move on, let go.

I tried to write a poem about it years ago and surely didn’t quite get over what I was trying to say but...here it is:

I am a duck
floating on a pond
waiting for my transfiguration.

The water is still
but for the drifting moss.
I can feel it along the curve
of my feathery hips.

The water waits with me;
and its reflection is the key.
But water is a disabling pontificator,
a patron to no one.

And I am the duck
who believes in the story,
in the literal parable
of external transformation.
I will be revolutionized
as I pass under the stark cascading hurl
of a red velvet flag.

My specific awkward toddle
will turn into a general gliding betterness;
my dreary eyes and pallid sharpness
will turn rich, like the spring.
My starving winters will slip
into the sleeves of the past
like a retreating spell  –
hardships scattering
like startled quadrupeds
who will circle around
the rims of this pond
admiring, approving, accepting

the patient duck
who has floated, drifting,
a long secluded meditation.
Leaves fall from the trees
like cards. I read their skeletal lines.
I have become one
with the best of nature.
Now I wait for best of nature
to become me,
all weakness melting,
waves into ripples into nothing.

I am a duck, unusual,
but ravishingly austere,
holding to the brink of suspense
in honor of my metamorphosis,
sanguine for the long white neck
and broad spangled wings
and the sunrise of turning
my head strikingly slow to see
the eyes of the forest’s masses
fixed on my newborn swan face
in the fastidious reflection – of love,
admiring, approving, accepting.

As I read this, I heard Jack Nicholson reading "The Elephant's Child" in my head. I wonder if I still have that cassette.