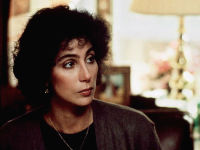 How did Loretta, Cher’s character in “Moonstruck”, get to be so wise? I am referring to the scene in the kitchen with Nicholas Cage who says he is miserable because he has no life, but Loretta tells him that he’s afraid because deep inside he knows he’s a wolf that isn’t afraid to cut off his own hand to keep him from getting what he wants in life. My wonderment is from Loretta’s own life – she was married for a short time and then moved back in to live with her parents and has a ho-hum job for a mortician. In the beginning scenes of the movies, she looks and appears drab. She even agrees to marry a drab man with an equally blah life. So where did she get her wisdom?

Loretta is actually a freelance accountant working for a few clients, including her Aunt and Uncle’s convenience store, the mortician and a florist (remember Loretta kissing the rose?). This isn’t spelled out overtly but you can see her jumping from client to client in the first few scenes.

I don’t actually think Loretta is very wise in the beginning of the movie. The movie is really all about her process of getting wiser about the true nature of real love vs. a practical relationship of convenience. The scene in Ronny’s kitchen was really projection and her beginning to think about love in her own life. She can easily tell Ronny what his fears are but she can’t see her own. So she is telling Ronny what she needs to hear herself. Her life has been painful and she has responded by making safe choices or hiding from pain, precisely what she glibly criticizes Ronny for doing. This conversation is the catalyst that gets her to reconsider her choice to marry Johnnie. But at this point, she’s not really wise; she’s just a big talker.