Happy Thanksgiving all. My bf and I had dinner with two friends at The Sportsmen's Lodge this year. Which was bittersweet as rumor has it they're tearing it down next year. It was quite a celeb hot spot in the day. However, the only Cher reference I can find now is from the wikipedia page on the place: "Brad St. James and Susi Q (aka the "New" Sonny and Cher) have been the in-house musical entertainment every Friday and Sunday night since 2005."

Anyway, to quickly cap Cher references last week Air America made two Cher that I happened upon. While talking about cheap toys we loved as kids on The Stephanie Miller Show (in honor of this Christmas in a bad economy), someone called in complaining about having the Cher doll and how the hair would always get caught in the quagmire of the eye lashes.

Later in the week on the Rachel Madow show, Andy Borowitz was a guest to talk about Sarah Palin's Thanksgiving thankfullnesses and he commented that Sarah Palin's political career is like Cher's Farewell tour. You can see this joke coming from the horizon line can't you?


Also of note last week, my bf and I took some time recently to play a game of poker with the Cher deck that Cher scholar Eileen was very nice enough to pick up for me at the Cher Caesars store a few months back. Here is the photo essay of our inaugural game.

When I saw the Bette Midler playing cards in the Cher/Midler Caesars store I thought, Cher should have those! And now she does. Quality control comment: the box came unglued immediately. These seem like they were rushed through production. And only the jokes and queens (of course) have Cher photos...but that aside -- I LOVE THEM! And no Cher junk trunk would be complete without them. 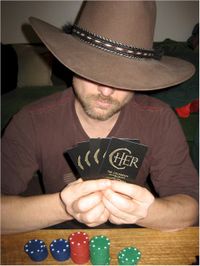 My bf studies his Cher cards.... 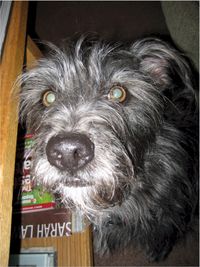 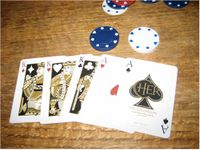 I throw down my hand...it looks pretty good, those aces and all. 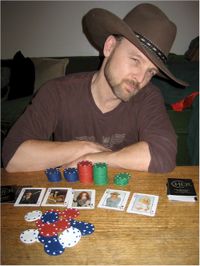 Five Queens? What the?
God dammit!