Cher's New Album
The Week That Was Supercalifragalistic 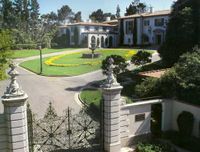 While I was waiting for someone at the bookstore to come out and help me find a book on the city of Redondo Beach, I picked up a copy of the new Tony Curtis autobiography American Prince. I leafed through the index to find Cher references.

I never really liked Tony Curtis, ever since I saw him on The Tonight Show years ago when he stated he thought his current hot, young girlfriend was even prettier than his daughter, Jamie Lee Curtis.

On many levels -- a dipwad, I thought.

But anyway, Curtis talks about Sonny & Cher on one page of his new opus. He talks about Sonny wanting to buy his house (but which one? Didn’t they end up buying two of his houses? One on St. Cloud and one on Carrolwood -- see pic above, both in Bel Air?). Curtis also talked about being a guest on The Sonny & Cher Comedy Hour when S&C were in the process of splitting up (remember his “Detective Fat”?). Curtis casually sympathizes with Sonny and says the breakup was basically over Cher’s ambition and her not wanting be part of the act anymore, 'cos it was holding her back.  And if I remember correctly, this was Sonny’s version of events as well. But not the version many Cher biographers put forth.

Curtis taking this side is not surprising since I recall him appearing occasionally in Sonny’s post-Cher social circle lists. And it’s somewhat disappointing that Curtis plays that down in this book, like he was some disinterested bystander an all.

And dude, you title your book American Prince? Could the book be that credible? Okay, I admit my tastes veer more toward Tony Manero than Tony Curtis. But in any case, this all reminds me of that old James Taylor/J.D. Souther song, “Her Town Too”: