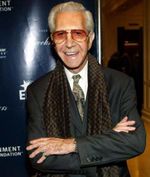 Mr. Blackwell, the celebrity with no first name, has died. OMG, how will we know how to judge what celebrities are wearing now?!

He was a bit schizophrenic with Cher. At first she was one of his best dressed in the early 70s; but then by the 1984 she topped his worst list and then was on it again in 1999.

See a compilation of the yearly worsts:
http://ap.google.com/article/ALeqM5h3KVqscVrccxibkegEYLw94QNTdwD93U1VF80
No one seems to care about compiling the best.

Now I'm getting wise to what it takes to attract Mr. Blackwell's attention.

The Spice Girls made the worst-dressed list in 1998. Today, they're old news.

Cher topped the same list last year. The reason? She made a major comeback from obscurity. She was news again.

What was interesting, at least to me, was that just four years ago, Blackwell dismissed any mention of Cher. He said then, "She hasn't been around for a long time, and she buried herself completely when she did that navel bit. She's no longer on my list."

What a difference a few years make.

"You've got to talk about people that you can see," he once told an interviewer.

We are seeing Cher again. We're also seeing her navel, and everybody else's.

Blackwell is an interesting guy.