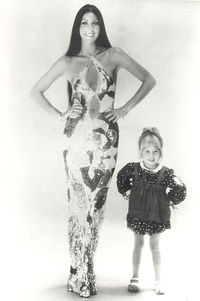 Maureen McCormick’s book about life as a Brady Bunch kid, among other subjects is now available. Cher Scholar Robrt sent me the excerpt where McCormick writes about meeting Cher.

The setup: the group The Brady Kids had their first musical appearance at a music industry show at Caesar's Palace in Las Vegas. Sonny and Cher were there and met the Brady’s backstage.

I was enamored of Sonny and Cher. I couldn’t take my eyes off Cher. It was the first time I had been around a woman who thoroughly mesmerized people, who commanded your attention with her looks. We were introduced to her backstage. She was with her daughter, Chastity, a tiny blond cherub with her mother’s expressions. Eve (Plumb) held Chastity’s hand and sweetly asked, “Can you say ‘elephant’?”

Before she could respond, Cher cracked, “She can say a hell of a lot more than elephant, that’s for sure.”

First of all, in my fantasy version of this episode Cher says “She can f*#king say a lot more than elephant, that's for sure.” I don’t know why but that’s more believable to me for some reason.

Secondly, this brief exchange is interesting on many levels. For one, it shows how caustic and coarse Cher could be even among teen celebrities and her own kid. I’m not judging that; but I can attest to being jarred by it the first time I read Cher's language peppered with the f-bomb all through that People Magazine article of 1979. I was nine years old and sick with the flu at the time and my parents brought me home a milkshake and this Cher gift (Cher gifts becoming somewhat of a rare occurrence after it started to occur to them that I wasn’t outgrowing this Cher fetish). And this was right when my illusions of Cher being the classiest, vulgar-free princess were first shattered. I f*#king got over it but it took a while.

Secondly, it also shows how even the most lusted after teen blonde icon of the early 70s, Marsha

Brady, #1 on every boys ToDo list and #1 on every gals ToLookLike list, was actually enamored of Cher who she saw as fully commanding with her looks; and meanwhile Cher is coveting the look of blonde princesses such as her mom, sister and Marsha-Brady-types. It’s insane, absolutely the stuff Dr. Seuss Sneetches fables are made of and evidence that our collective insecurities cause us to chase our own tales like idiots.

And not only could Chastity say the world elephant, she had probably already ridden one in that parade by then.

You really cracked me up here! I so enjoy your columns & this part was exceptionally well-done & hilarious!