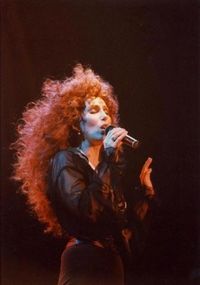 Two things happened recently, simultaneously. I received a bootleg of a Love Hurts Tour concert, a show which I had not yet seen in full, and I started reading James Joyce’s Ulysses.

THESE TWO ARE VERY DIFFERENT THINGS

This is Germany 1992. What you’d expect a bad bootleg to be (for years I pined of this in a ratty cardboard box, filed in after KATE BUSH and before BOB DYLAN, scrawled with markers on VHS spines at record conventions – always missing). This copy disorienting, dark, fuzzy. Mrs. Brisby I am suddenly. A rat in some German’s pocket trying to stretch for a view.

Where are all the video clips? I hear the sound (it’s going on forever), the David Letterman asshole bit, a Barbara Walters question.

We can’t see upstage. Cher is suddenly there, fuzzy blur with a big wig. The world is industrial-looking, constructed second-story platform and for a moment I wonder if that’s not an impersonator up there. Is this another false entrance? 1989 intermission – remember – at the Mirage – in your hometown?  Her big entrance here, floating down an elevator platform. lack. luster.  No staircase. No chandelier. No stiletto. No King Kong palm. A stage oddly smooshed, stone pillar bookends, mish-mash of last tour’s scenery from storage in the Valley.

Cher wore a somewhat subdued coat. Introduced us to what was surely a great novelty at the time, Cher singing U2 and she still hadn’t found what she was looking for.  Sixteen years later….hire a P.I. Something.

Lots of men with long hair and guitars in this band. Or maybe it just seemed so because they were all crowded up on the stage like that. They spent more time hair flipping than she did...but in the way fashionable for hair-bands of the day. Flip it all over like a Breck girl. Flip it back again. And so on. And so on. To the beat. Certain things about the late 80s/early 90s I really don’t miss.

We do get some throwback limp-wrist moments. Inexplicably comforting. Do you think any lip synching went down during this show? I wonder but I can’t focus hard enough to be sure.

His name must be Bruce, then.

Bye Bye Baby. I don’t know this song. I looked it up. Famous Mary Wells number. Blusey now. Those are weird pants. Is this tour loud or something? Or is my bootleg loud, unmixed. A cacophony of guitars and belting. A hyper blond doing backup. She’s wound up like a hollow tin toy. Are there no dancers this time? Erratic kicks and twirls.

She’s had recent hits, don’t you know. This aint all covers any more. Thank you Geffen AOR dude John Kalodner. “We All Sleep Alone,” “I Found Someone.” Voila the hole fit (1979, 80, 87, 91, perpetuity). Are those dancers upstairs? Ahh, drat. Is that a tree (bad angle can’t tell)? Suck-ular dancing. Hole fit without a jacket. She is still fit, working on those Cher Fitness videos about now. NewAttitudeofBodyConfidnence. How does one keep a big curly wig on one’s head with those industrial fans blowing so hard?

Love and Understanding. The intro for this song is much more interesting than any musical moment actually in the song. A lace baby-doll dress. Ill fitting. A back up singer out of control. Tell me why we need more love and understanding? Why? Cos the world if full of hate and incomprehension. That’s why. End of story.

All songs raced through so fast. “All I Ever Need Is You”-at-the-Sahara-style. Circa 1973. It’s ruint that way, ma! The hyper mania quietly depressing.

But Save Up All Your Tears. We get, on average, two  songs per dress. This one’s sleeve’s falling off. I think. More clips and then After All in the Snow Queen fit but really this is not the venue for it. The stage is too small for fake fur that big.

Many Rivers to Cross – but not in that fur coat. You’d sink, you would. In what dress, then? That Academy Award dress. Yeah. She said it. I’ll schlep out my Oscar dress (including tower of Wigness) for this song. I love this song, Jimmy Cliff, I really do. I also like that Cher recycles. It’s thrifty.

Dance sequence. Are druids coming out? Smoke, throw your hair around! The dancing stage is too small for the dancers. Fire of Bruce Springsteen (made famous by The Pointer Sisters) but I liked her Tougher Than the Rest from the Boss. From Tunnel of Love.  So woebegone confidence.  A wooden stool, a red wig, polka dot black pants. Cher said of a spotlight and a stool – she’d die of boredom. Suicide! In a sea of monotonous belting, this is unusually sweet. Interesting. Really gripping. The red wig does a lot of the work.

Just Like Jesse James, this song deserves to be shot dead. Pleh! It’s a recent hit but where are all the other singles. We’re pushing a new album here? Lucinda Williams did four shows at the El Cid in LA last year: each night a full studio album. Wouldn’t that be swell, ma? Stars, With Love, Man’s World, All I Ever Need Is You? Sir, could you refill the tobacco in my pipe (dream)? 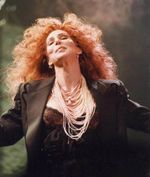 Love is a Battlefield – This Benetar ditty is almost 10 freakin’ years old? She’s still fit but this is not a  heart-of-stone punch in the gal's balls (although she’s still skipping). Even their synchronized dancing

falls short when you think of Benetar strutting into your personal space with her gang and their skirts of many tatters.

Flag dancing interlude before Turn Back Time, back before I sat down to watch this bootleg. That netted jacket with the torso too long...a black thong diaper.

Love Hurts, the hair-band version.  More Nazareth than Jimmy Webb. Less vulnerable. More bombastic. I’m feeling ambivalent about the difference. Are those lighters or sparklers? She kneels around her knees like she’s sick. Then she’s gone. Where is she? Back with that baby-doll white nightgown –the UK issue of Love Hurts

again, the barefoot with the flowers. Hyper feminine. Uncomfortably uncharacteristic. But maybe not...truthfully.

When she gets behind closed doors.
Then she lets her hair hang down.

This bootleg makes it looks like hospital gown. Shoop Shoop, there’s a second encore song. Racing through this one has always worked well for me.
What? A second encore?

In what parallel universe have we fallen? The Fire Down Below, old Bob Seger shaken out from the Heart of Stone set.  Long-faced roadies standing at the back-corner perimeter ready to break down this inside-out stage. Union overtime’s ticking, their faces say. Nice break of the fourth wall. Who cranked up the backup singer's key again? She sings now. Actually has a good raspy voice.

Head bangers shake their hair forward and back.

Sometimes I just feel like I gotta slog through it, you know.  Hey, this Love Hurts Tour bootleg and Ulysses really do relate.

1. I liked this bootleg concert. AS, well, I had 2 dvd versions from different places in Germany to view:
each had it's own perspective audio/video "nuances."

2. I liked it because this was about as "like everyone else whom tours" as Cher has, probably, ever presented herself. JUST a singer and her band.(OK, there were some dancers and costume changes.BUT even those seemed low-key and not to influence the audience.)
AND, Cher wasn't as "bad/or bored" as she thinks she would be just standing and singing.(OK, maybe she looked that way at times, but, once again, the audience seemed to be having a great time. And, I "believe" this was during the onset of her 1st "mysterious" illness: Barr-epstein.)

3. I thought it was interesting how the "over-seas" audiences re-acted to the songs and other offerings on this tour, that american audiences wouldn't have cared about.(Of course, this album was not a hit in the u.s.)

4.The OSCAR DRESS moment
singing the "one song that most typifies me"(cher to diane sawyer) "Many Rivers to Cross" was so poignant!!! I was ALMOST moved to tears.

You're right. That was the most "like everyone else" show she's done. That *is* a good thing about it. The universe didn't implode inward for the lack of a giant snowglobe on stage. Good point.