Crash Week
Twilight Zone in the US

Last Saturday, as you may recall, I was melancholy about being a David Foster Wallace fan and his (really) tragic suicide the day before. But I did have a positive fan experience the next day to sort of balance it out. I was able to see the first show of Lindsey Buckingham’s new tour at Royce Hall in support of his new album Gift of Screws.

I’ve seen Buckingham live with Fleetwood Mac and I contend he is ridiculously absent for the top 100 Rolling Stone's list of best guitarists in rock music. Not only are his guitar contributions detailed and inhumanly energetic but his live arrangements and stamina are really jaw dropping to see. The show was unbelievably amazing. I'd put it up there with Prince for single performances (although a Prince show is a much bigger audio-visual affair so it's hard to compare - but if you strip down everything...).

Except for Buckingham's was probably the worst light show I’ve ever seen. First, let me say Buckingham is so good, he simply only requires a spotlight. The spotlights he did have (too many) sat on stage pointing out into the hall, forcing fans in the balcony to squint in discomfort and hold their hands up to block the light. In front of us, audience members moved in significant numbers to find new seats. It almost looked like a mass exodus except they were dancing as they were relocating.

Of his solo hits he sang "Trouble," "Go Insane" and "Don’t Look Down." He did not do "Holiday Road." From his hits of Fleetwood Mac he sang "Go Your Own Way," "Second Hand News," "Never Going Back Again," and "Tusk." From the Gift of Screws album he did "Treason," (a good election song by 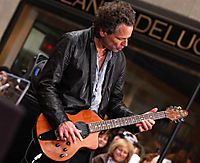 accident), "Right Place to Fade" (I think - not sure he did this one), "Love Runs Deeper" and "Time Precious Time."

I downloaded his new album from iTunes and the highlights are "Great Day," "Treason," "Right Place to Fade," and "Love Runs Deeper." "Great Day" he co-wrote with his son.

Gift of Screws is actually a reference in an Emily Dickinson poem dealing with the pain of decay (and the song is basically a jam of the poem):

Cher could do an awesomely rockin version of “Right Place to Fade,” a song written by Buckingham that contains some shades of her recent tour themes (Never Can Say Goodbye and all) and has a playfully rocking guitar at the beginning and end, some fun mini-bridges, bam-bams and whoo hoos Cher could slap down pretty well. It’s in-your-face the way old Fleetwood Mac/Buckingham used to be. Awesomeness.

Come along, lay down and talk to me
Tell me all your fear will allow
It doesn’t matter who we thought we were
We ain’t got time for it now

He’s under-appreciated, this one.

i love everything Lindsey has done.... He is remarkable; but kinda down-played like Cher...