The OCFC
Songs Cher Should Cover (of Lindsey Buckingham) 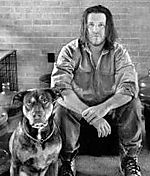 Wow…what a week we’ve had: the markets, the election, David Foster Wallace.

I just spent my lunch hour experiencing the closest I’ve ever imagined to seeing a run on a bank. It’s like Mary Poppins but in reverse: the lobby of Bank of America filled with WaMu customers trying to transfer their monies. And it’s sad because I liked WaMu. I really did. They had pleasant lobbies and were always situated in very cool buildings of retro architecture.  Okay, not a good reason to love your bank, but...

And then the suicide of David Foster Wallace really shook me up. I was a bonofide fan of this writer. Although I only had three books of his (two personally signed) and although I had only been to three of his readings, I took his style and thoughts to great heart. He wrote funny and touching short stories and hilarious yet philosophical essays on pop culture, politics, pretty much anything with the best, most interesting footnotes you’ve ever seen. (So much better than someone trying to explicate a T.S. Eliot poem but don’t get me started.)

He wrote wonderfully packed sentences, was handsome in a frazzled sort of way, and came across as a genuinely nice dude. The last reading I attended was years ago at UCLA’s Hammer Museum in Westwood. He read us an unbelievably tragic story about a baby and then described how it was part of his effort to give up a tone of irony for one of sincerity.

Irony is the “it” attitude of my generation. People my age only like things ironically, with a wink wink. Which is why everyone always thinks I like Cher ironically. Which I don’t and that annoys me. But I really love irony in its naked form. But DFW got me to see how overdone it’s become and how spiritually empty it leaves us. I yearned to see the kind of sincerity back in writing that he said he was going to be attempting. I looked forward to that and decided to try to move in that direction myself.

I even thought about his idea weeks ago as I was converting my two Olivia Newton John albums to Mp3 and came across one of the few songs I know of that Olivia wrote herself, “The Promise” about how wonderful dolphins are. The song lyrics are easy to snicker at because they’re so sincere but I just took a minute to love them for just that reason. It’s so much safer to be ironic. So much braver to be sincere. And you end up feeling more moved by it. His mission was a noble one.

Read my brief review of his book of essays, A Supposedly Fun Thing I’ll Never Do Again, from the site Ape Culture. That's the book where DFW urged us to consider the TV and the fact that we spend a lot of time staring at a piece of furniture. Absurd, true yet somehow acceptable. David Foster Wallace, I believe you did what you had to do…but I wish you were still here.