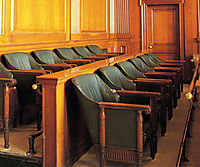 The Cher Fanclub is back up (sort of) after a few years of going dark. A week or so the site said it was only open to past members for the time being and I must admit, I feel a little shut out, like a second-class Cher-citizen, as it were.

Now the Join page says “sign up today” but there’s no link, only a button that says “instant enrollment coming soon.” But to clarify: soon is not today. In other words, join today, but not today... soon. Capiche? The site's frames are very complicated and heavy to load. But still...I’m ready to plunk down my $25 smacks a year as soon as someone...returns.. to the register. http://www.officialcherfanclub.com/

This week the 5th Cher Convention happened in Las Vegas this week at Caesars Palace to coincide with the current block of Cher concerts. I haven’t seen any Cher group posts about it yet but initial newspaper reports say there was a low turnout and Cher didn’t show. You can lead a Cher Convention to Cher...

It’s hard to be a super-Cher fan sometimes. It really is. But as Cher has proved recently, her show is selling out amongst American hoards. She don’t need no stinkin’ superfans. Sigh.

Lots of links happened last week. More later as I settle back in to my life! Not to be melodramatic about it but I’ve had a rough two weeks. Where the hell have I been? I was on jury duty (with loud court-disturbing coughing bronchitis no less) and when I got home was too exhausted to even type out a distress message to y’all about where I been.

Imagine Cher Scholar driving to a criminal courtroom in the Compton area of Los Angeles for a gang trial with intent to sell cocaine allegated, a defense attorney who looks and talks like Yeardley Smith and a prosecutor who looked like Tyra Banks. A petite and pretty Japanese-American judge who proceeded at the speed of frozen molasses. Imagine a deliberation scene somewhat like 12 Angry Men. An acquittal struggling to happen: 4 to 8, then 9 to 3, then 11 to 1, then 11 to 1, then 11 to 1. Almost a hung jury until the white Redondo Beach juror releases a angry fist of his racial-profiling-prejudices against the face of a melting pot of peer pressure.

It was stressful but I learned a lot. Did you know the Bloods wear St. Louis Cardinal and Boston Red Sox gear cos it’s red?

In the Cher-meanwhile, my bfs co-worker gave him an article to give to me with some fabulous pictures of Cher’s live show in full-spread-out color. The article is about how her stage and effects were built. The magazine is Live Design and the issue is August 2008. I have no idea where one would get a copy of one’s own. Start with http://www.livedesignonline.com/ and have a good, healthy, stress-free, jury-duty-free weekend.

Posted at 05:56 PM in That's The Obsession Talking, Website Reviews, What This Really Says About Me | Permalink | Comments (1)

Why No Stars on CD? Billboard Magazine Speaks... 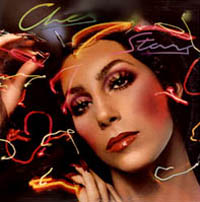 My friend Christopher is an avid reader of Billboard Magazine and minutes ago he sent me this from Billboard's Q&A column:

For July 25, 2008,
Ask Billboard is updated every Friday. Submit your burning music questions to Keith Caulfield at askbb@billboard.com.

Keith, Cher released four albums on the Warner Bros. label from 1975-1977 and they still have not been released on CD. The titles are "Stars," "I'd Rather Believe In You," "Cherished" and an album billed as Allman and Woman (which she made with then-husband Gregg Allman) entitled "Two the Hard Way."

Do you know why these have not been released on CD? Or do you know when they will be on CD? It seems to me that Warner Bros. would have released them in 1999 when Cher was riding high with "Believe," but they didn't.

Also do you know anything about an album recorded by Cher right after "Take Me Home" came out in 1979 that was rejected by her record company and never released by Casablanca? Her album "Prisoner" was released instead.

Thanks for your help with these two questions.

As it turns out, Cher owns the masters for those four Warner albums, so she controls their fate. We reached out to Warner Bros. and Rhino Records to confirm this.

So, why haven't they come out on CD? We'd have to ask Cher the next time we get her on the phone.

Unfortunately, I don't have any information about the alleged aborted Casablanca album.

Interesting; but there you have it.

These are the Houses that Cher Built 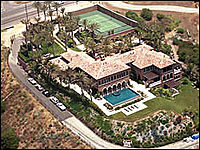 Since it’s my birthday, can someone buy me a $45 million, 14,000-square foot 1992 Italian Renaissance-style villa in Malibu California? I could use the 1.7 acres of a bluff overlooking the Pacific Ocean to meditate.

The Listing agent is Robert Kass, of Hilton & Hyland, an affiliate of Christie’s Great Estates and he says, “The décor is now a lighter, more beach-resort style.” So it’s decorated to sell, I’m thinking.  Yes, methinks Cher has left the building.

courts, an infinity pool and multiple verandas – although I can see where multiple verandas might come in handy if I run for president of Argentina or something. I can give speeches from them and wave to my peoples.

There's also a guest house and as you know, you can’t sell a house in LA without a guest house in the back, even if you live on a hot-dog-stand sized lot. Extra rental income see.

For the full article, see The Wall Street Journal. The paper also reminds us that in 2006 Cher sold a bayfront house in Key Biscayne, Fla., for $8.8 million. And I can’t read that and not start singing those lines from “Pirate” on the Cherished album. It took me years to figure out Cher was singing Biscayne

A few years ago, a friend and I were discussing those odd yet ubiquitous pixilated pictures The Wall Street Journal uses for stories about people.

And now Cher has one! 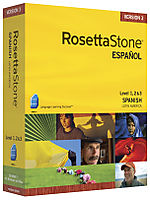 Well, it seriously was my birthday this week. 39! The countdown begins today! 364 more days!

And although I’ve had the death of a cold, I did have a nice birthday and got some sweet stuff: a stereo for my iPod so I can share my entire Cher collection with my bf now. He himself bought me something I’ve been whining for all year: Rosetta Stone software so I can teach myself Spanish. At work they were teaching us Spanish earlier in the year and I really loved working the other side of my brain trying to learn it. But then the budget killed the program. Rosetta Stone commercials really spoke to me, all the total immersion stuff. I can’t wait to try it.

This also reminds me of the gift my bf got me last year, Sirius radio. For the first 9 months I couldn’t get it to work – bad reception. Finally I called to cancel the dern thing and God bless em, they offered me a professional installation if I’d stay in the Sirius family. Well, after the first installation, the equipment died. So they sent me replacement equipment and I’m happy to say it’s working great now. Sirius is really good on long car drives, I must say. When we drove to New Mexico I was able to set all my favorite artist alerts. Let me tell you, Sirius radio LOVES Billy Joel, much to my bf's dismay. For my Cher alerts, I’ve been tentatively disappointed. For the first month I heard ONLY “Turn Back Time” and “The Way of Love” every few days. From her whole catalogue, that was it! But just this week they did play “Dark Lady” once on the 70s station and “Take Me Home” on the dance station. Stay tuned for more on that. 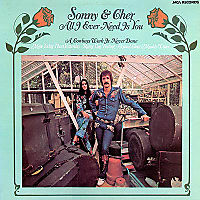 [Many, many compliments deleted here for the sake of this blog’s attempt at appearing modest.]

I have been looking all over for a correct version of the S&C “All I Ever Need Is You” album, since it has a lot of my favorite songs on it and it’s been killing me that I don’t have a copy. For whatever reason, there is a version on amazon.com that isn’t the Real Thing. It’s some sort of compilation with a few live songs—cool, but not what I want. (I’m a little baffled why they would release an album with that name if it’s not the actual album…luckily the cover art tipped me off.) Of course, everytime I search for this album on ebay, it’s the different version that amazon has released. So, anyway, my question is, would you have any idea where I could find the correct version? I understand it’s never actually been released on CD, but anywhere that I could find some sort of bootleg or anything? Yours, Randie