Last week, Jimmy Dean asked me if my comments about Biscayne Bay were a joke. Alas...no.

Here is the lyric:
(note: most sites get the lyrics to this song wrong; their attempts at the first sentence don't even make sense. Cher scholar Tyler was the only one I found who posted them right. 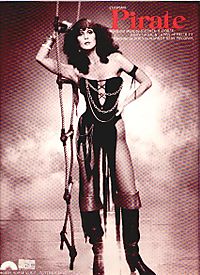 I only want the right to love you
I know the sea won't let you go
Pirate, my love will only chain you down
So just know how much I love you
And then turn that ship around

Second Verse.
Every time that he'd sail back to me
We'd fall in love again
And my face would fill with wonder
At all the places that he'd been
But I knew his sweetest love song
Was when he heard the trade winds blow
And I loved him way too much
To tell the secret he should know

Chorus
Third Verse...
Now as I watch in silence
Another young man goes to sea
And his silhouette is stirrin' up
A painful memory
And I know his heart is set to sail
But mine is set to cry
Cause I feel as the way I did
The day his Daddy said goodbye
I told him.....

Speaking of Cher houses, the brownstone in the movie Moonstruck just sold for $4 million instead of the asking price of $5 million. Times are tough, man.

The LA Times also wrote about the selling of Cher’s Malibu house which they call The Palm Palace.

I've always loved singing to these kind of chersongs, and imitating that Cher vocal sound.(She adds musical notes and vowel sounds that don't exist and were never apart of the of the original work.) Years later, I realized, she sings like a cross between Judy Garland and Elivis Presley.

Cross between Elvis and Judy! That's great! There are many guesses out there for that line. We should post a contest for the funniest guess. Usage of the word Keen is top so far.