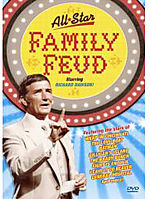 A friend showed me a few episodes of her new DVD of All-Star Family Feud. It must have been circa the late 70s because host Richard Dawson made a joke about the Jimmy Carter, Ted Kennedy, Jerry Brown debates.

This particular episode pitted the cast of The Love Boat against the cast of Eight Is Enough (I never liked Eight is Enough  by the way - was it a comedy, a drama?). The Love Boatcast seemed a bit wild. Cruise director Julie threw a few angry eyes at Doc for his lame answers. Issac looked very flirty. On the other side, it seemed almost like a real dysfunctional family of 8 is Enuffers. To the directive “Name a body part where you would dab perfume” Dick Van P. answered inexplicably “the tip of your tongue.”

One question was “Name an Italian singer.” 100 people surveyed, top 8 answers on the board:

No one guessed Sonny Bono, including Dick Van Patton, who at some point was golfing friend of Sonny. Maybe that was later, in Sonny’s Palm Springs era.