Estelle Getty died this week, the first Golden Girl we are to lose thus far. But Getty also played Barry Manilow’s mum in the TV musical Copacabana and Cher’s mum in Mask.

My favorite line from Getty in Mask was when she walked into the dark living room after returning her grandson Rocky from a baseball game and saw Cher (as Rusty) on a bummer (as Sonny would say).

She shook her head, rolled her eyes and said “Florence.” The she turned around and walked out. 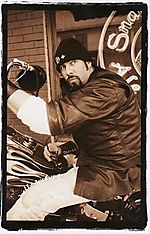 His name is Tim Medvetz and he’s known on the Internets as a motorcycle customizer and a controversial reality-show Mount Everest climber. A quick google search provides his basic dets: 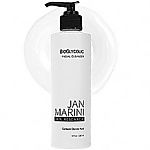 I hate to even post this stuff. The whole “what’s in Cher’s latest shopping cart” thing. But apparently there are more secrets to good Cher skin. Along with secrets to Cher smelling nice, skin products are a most popular topic of gossip among Cher fans who are interested in this sort of thing. But what I really want to know, especially in light of this weeks boyfriend news, is what brand of lube they're using.

I’m totally not serious. I have a hard time drumming up a care about even that.

However, there is a quiz on the site: Cher song or beauty product? - which includes some pretty obscure songs. 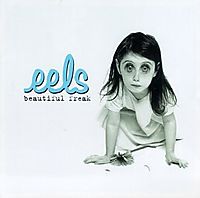 1.  I became a fan of The Eels. I know, they’ve been around for over ten years. But better late than never, no? I’ve been listening to Essential Eels and in some alternate universe I think it would be good to hear Cher sing “Mr. E’s Beautiful Blues” (the one that goes “God damn right - it’s a beautiful day!”) or “That Not Really Funny.”

And that made me wonder about what kind of rock album Cher plans to do next. I mean, what is a rock Cher album in this post-grunge world?

2.  I gave a speech at my parents’ 50th Wedding Anniversary and I didn’t cry like my two older brothers did. I think this is because I was the first to give speech and my mother hadn’t started bawling yet, although she had her little travel pouch of tissues ready to start in. Either that or maybe sometimes I do have a heart of stone.

3. My sibs and I gave my parents a Hopi wedding vase as a gift. My first-born brother also gave a speech about family togetherness, which surprised me because we are usually fighting but he did bring up some funny stories, including the one about how they always used to fight over pieces of my mother’s fried chicken, including the livers. My other brother did a video about my parents and their friends which was very good and touching. He and I previously had a fight about who was going to say what about how my parents met (which was the whole subject of my speech). He called "dibsies" on me and I called his dibsies retarded (in a sibling skirmish and not handicapped sense), which pissed him off. Lots of therapy fodder here.

4.  Our dog Franz Alonzo regressed while we were away and chewed up his nanny’s mattress. He ended up back at the kennel for that. 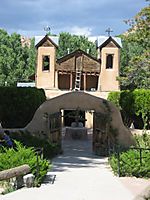 5. While visiting the famous church at Chimayo, the Lourdes of America, my car ran over a big rusty-looking object of a very solid nature and from then on my car started making funny sounds. Luckily it was only a bent exhaust pipe hitting a heating shield. Maybe the dirt at Chimayo truly is miraculous and Bluebelle had some of it stuck on her tires. My bf drew out a cartoon drawing of what he remembered the object looking like as we hit it and later my father could only surmise from the cartoon that we must have hit a very small UFO. 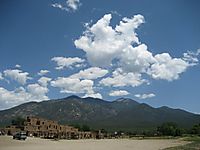 8. At the reunion, my bf was a definite hit with the distant relatives (including two who never usually come up and talk to me but made a point to tell me how much they liked him) as well as with the nuclear family, mostly for making a good gazpacho and steak-sandwich dinner one night at our Santa Fe casita. 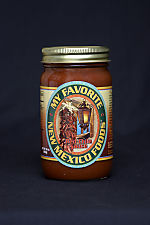 10. At my parents’ anniversary party, I spoke to the parents of my first childhood friend (he died of Leukemia when I was about 8). Back in the 1970s, when I would visit him on their ranch, I was always kind of scared of his dad, a tall and skinny cowboy with a big mustache who mostly leaned up against walls and looked like he could kick your ass just for the sport of it. But 30 years later I was surprised to find myself chatting with him and his wife and when they found out my bf and I were engaged, they told us their secret to a long marriage was sleeping in the nude.  Which was possibly TMI but I can top that because, (whisper) to be honest with you, sleeping in the nude makes me itchy.

11. My brother found some of our long lost family friends The Padillas on the Internet and he surprised my parents with them at an anniversary party and it made my mother cry again.

12. The tram from Albuquerque up the Sandia mountains is the world’s longest tram. 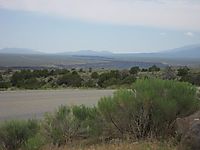 13. There is a big awesome crack in the earth made by the Rio Grande river and you can see it from Taos, New Mexico. Click open the picture to the left and look closely. Then look at it from the Taos Gorge Bridge below. 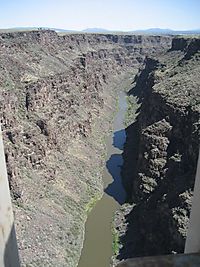 14. When my bf and I drove my parents to Roy, New Mexico, where my Dad spent his summers with his grandparents and cousins, he told us a story about how his grandfather would drop him off on the ranch with an axe to cut down prickly pear trees all day. My dad said that years later it occurred to him that by cutting down all those trees he had actually been spreading hundreds of prickly pear seeds all over the property. My bf later told me he enjoyed hearing all of my Dad’s funny stories about growing up on the ranch, which is what I love about my bf b/c he likes the same quirky stuff I do.

15. I got stopped by a New Mexico cop for speeding through Cimarron with my bf and my elderly parents in the car.

16. You can eat a gelato in Santa Fe called sage and another called Strawberry Habanera.

17. My Dad’s former babysitter on the Hopi Indian reservation is now a famous potter named Olive Toney. We tried to find her on our way home through Arizona but were too shy to knock on her door at the first mesa to buy a pot.

18. I am lousy at picking out motels. On our drive back I insisted on a run-down Howard Johnson in Flagstaff to save money and they over-flattered us and then over-charged us for a room right next to the train tracks where trains whistled by all night long. To add insult to injury, its restaurant served inedible french fries, practically a culinary impossiblily. Luckily we were able to eat at our favorite Flagstaff breakfast place the next morning, Let’s Eat.

Posted at 09:12 PM in Songs Cher Should Cover, What This Really Says About Me | Permalink | Comments (4)

Cher’s-getting-married rumors are kicking up again. America must have a burning desire to see Cher married again. Why is that? We’re all like worried, Jewish mothers I guess.

With Love Blogged About With Love

I found a blog post review of Cher's 1967 With Love album. It earns Cher Scholar’s vote for best-Cher-revisionist-music-critique-of-the-day with this commentary:

Though there are those that would dispute their musical validity – I used to be one of them – their [S&C's] Lps, as well as Cher’s early solo albums are a storehouse of late-period imitation Wall of Sound-isms, Sonny having studied at the tiny little feet of the master himself. That said, while Cher’s albums are often weighted down by ill advised versions of standards (but then so were any number of Motown LPs), there is almost always something cool waiting their for those willing to take the time to look.  [The album] includes a version of ‘Hey Joe’ – which was pretty cool – but the tune that really hit me was her cover of Phil Ochs’ ‘There But For Fortune’. Oddly enough, the first version I ever heard of this song was a quiet, pretty cover by Francoise Hardy (Cher-like in her own Gallic way). As I said earlier, thanks to Sonny’s (and Cher’s) time with Phil Spector, there are many Sonny & Cher recordings that bear the mark of the Wall of Sound. An extra added bonus is the fact that their musical director was none other than New Orleans expatriate, Harold Battiste who brought many Crescent City players, like Earl Palmer, Alvin Robinson, Jesse Hill and Mac Rebennack out West. It has long been rumored that the first ‘Dr. John’ LP was recorded during leftover Sonny & Cher studio time. ‘There But for Fortune’ is a great showcase for Cher’s voice – not always my favorite, but outstanding when showcased properly, a la her version of ‘Alfie’ that runs over the end credits of the film of the same name – as well as a nicely layered arrangement. Posted by Larry.