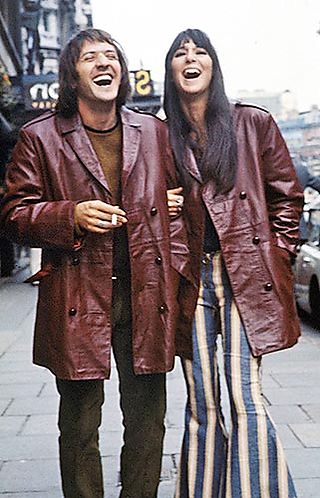 I will be on a two-week hiatus from I Found Some Blog in order to work on a family reunion and my parents’ 50th Anniversary shindig. If I come back sane, I’ll tell you all about it. There is a chance we may never speak again.

So it’s a bummer that my last pre-hiatus post has to be about Cher fans behaving badly. Well, who knows if this arrested guy in the news was even a real Cher fan. He claimed his parents worked for S&C or something as he was grabbing at Cher’s hips at Tootsies Orchid Lounge, a famous honky tonk in Nashville. Yes, the man was plastered so who even knows what kind of a 'Cher fan' he was sober. And frankly, I think only sober fans should count.

There was a lot of fans behaving badly last week. Paparazzi (who are ultimately working on behalf of pop-culture junkies or fans in general) were attacked by surfers in Malibu. Could it be that the LA public is finally taking charge of an issue the authorities have been struggling over for too long?

Apparently photographers were at the beach stalking Matthew McConaughey and some local surfers got angry and pummeled a few of them. Here’s the LA Times story about it.

But the real story here is that paparazzi anger many more people in LA than the celebrities they stalk. The unfamous also feel the strain. A friend of mine from Larchmont recently reported that one day she couldn’t get from her car to her own apartment building as the paparazzi swarm wouldn’t let her pass on her own sidewalk. She had to bully her way through. Then when she reached her front steps she found them sitting there smoking on them. Who were they stalking? Lindsey Lohan on a movie location.

Articles about Cher in Nashville and the arrest are all over:

For Nashville man, Cher is a terrible thing to waist

Technically the man did not get arrested directly as a result of the Cher encounter. "The victim" (Cher) declined to press charges and he was arrested after getting thrown out and for another altercation.

And then Cher was in the latest National Enquirer, just the kind of tabloid so-long-so-dangerous for normal celebrity living. It’s a typical cretin piece about how many thousands of dollars Cher has spent to look so great for her current Vegas show. Interestingly it was spun positively and pro-Cher; but was just backhanded negativity, another plastic surgery story essentially under a fake smile. Ick.

With incidents like this you can see why Cher laments her life of fame from time to time, between the soul-less paparazzi (what’s their damage?) and fans rudely intruding on her personal space. And I’m beginning to think more fans would do so than not.

Approaching a celebrity is usually a bad idea, in my humble opinion. It usually does not end well just as approaching any stranger may not end well. Depsite what you think, you don’t know these people. They could be as loose-wired and unhinged as any other stranger on the street and so you risk your personal and emotional safety to assume otherwise. That’s number one. Secondly, they are approached constantly so unless you’re Queen Elizabeth (and even if you are), they have a much lower tolerance for being accosted by strangers. And news flash: you’re not Queen Elizabeth. So most likely, you have nothing to bring to their table but stress and annoyance. And yet you do it anyway for your own selfish gain. Who cares if celebrities should or should not have to put up with it. It's your motive that's suspect. And two seconds of Cher-attention never changes your life.

I've said this a thousand times -- I don’t want to meet Cher. I bet we wouldn’t even get along. So I cringe to be labeled a fan. Because the word fan itself is derived from the word fanatic...which implies crazy. You can't get around that.

Fans make Cher art. I actually like Cher art though.

While doing a google image search for 'Cher fans' for this post I found the above very-groovy picture of Sonny & Cher. Notice Cher looking happy and unaccosted. Good times.

Posted at 04:59 PM in Cher News, That's The Obsession Talking, Uninhibited (Celebrity Culture), What This Really Says About Me | Permalink | Comments (3)

...and Jimmy Dean, when I say only sober fans should count...I'm just kidding.

AND, you better hope the West Hollywood Gay Community, as a whole, doesn't beat down your door!!!!!! You know how those boys like to party!!!! The ones from THE SPIKE and MELROSE SPA are really "burly!!!" :)