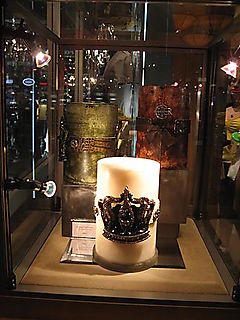 I did not spend my life’s savings in this store. It was a good store but not filled with the same wacky, fun items as the Barry Manilow store so I was able to keep some of my cash for a wedding dress.

However, the Cher Boutiques does sell the same cheap t-shirts that only last for one washing. The t-shirts sold in the theater lobby are actually a better quality. By the way, the items in the lobby are different than the boutique. So check them both out.

So, as you may have heard, Cher shares a store with Bette Midler. Is this fair? Elton gets his own store? Can Bette and Cher co-exist this way? My bf remarked that Bette’s items are more cabaret and Cher is more rock-chick. I know that idea probably is what Cher is going for but I honestly wish Cher would be more cabaret. Cher-fans circa the 1970s so loved her TV show cabaret, we can’t ever get over it?

The store was surprisingly neat and pristine. This is no” messy icon” store. Lots of expensive candles and jewelry that is not my thing. No potpourri rocks so we couldn’t exclaim as my bf’s mom once did: “I don’t want to smell Cher’s rocks!” You’d think that wouldn’t make sense but it kinda would.

My bf preferred the cool rock-chick Cher merchandise to Bette’s but agreed that Bette has better ads. Overall, the Barry Manilow store is more fun, more warm and fan-friendly. And he sells hilarious stuff like wine. Can we get some Cher booze? Manilow also sells purses made out of his old record albums. Bette did offer the Bette playing cards. I wish Cher had some of those.

I asked the elderly Cher store clerk who rang me up how sales had been going. He said they sell out every night. Mostly because 44k fans cram in before and after every show and they're looking for a keepsake. He called it crazy and insane. So busy “we wouldn’t be having this conversation” he said. I asked him if the Cher or Bette items sold better. Ever the politician, he said fans didn’t care, they all just wanted something. But that the CD and program outsell everything. He said they overstock every morning and restock the entire store every night. There were about 15-20 peeps in there when I was milling around. This was a Friday night when there was no show. I asked my Vegas-dancer friend Nellie why there was no show on a Friday night and she said Vegas casinos had all sorts of statistics about what night to go dark due to probable lack of sales; and common wisdom suggested Fridays were mostly traveling days for tourists still moseying into town.

This is what I bought (if I can remember – it’s all already been tagged, filed and boxed in the Cher Scholar vaults).