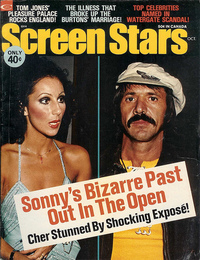 Last year a PHD at the University of Southern California sent me a link to her thesis paper on how Sonny & Cher defined celebrity marriage as a marketing strategy. She uses Nick and Jessica as an example of a modern celebrity marriage that she says heralds back to Sonny & Cher. Although now I wonder if Liz Taylor and Richard Burton were also a couple-as-one-marketable-celebrity-entity, too.

The copy of the paper I read was a longer, looser draft but essentially the same points were covered. The PHD student, Charisse L’Pree Corsbie-Massay, has now posted the essay on her website.

Her basic theory is that “the star couple creates its own marketing machine” which for S&C she dubs The Bono Plan. Star couples create their own unique celebrity entity. The marriage even helps solidify an individuals celebrity stature by giving them a safe-sex storyline and grounding their singular (sometimes scandalous) behaviors off-camera. Plus it’s all juicy biography material later on.

Okay, I’m making it sound more salacious than the theory really is. Although Corsbie-Massay  does quote someone named Dyer who says “Marriage is a perpetual tabloid scandal.”

Drawbacks of this plan include the fact that you have to let strangers into your private life, or some staged (in Cher's variety-show case) or edited (in Jessica’s reality-how case) version thereof. But the result is that the audience feels included somehow in your personal space. In any case, you need a constant medium to transmit your couple brand: for Sonny & Cher TV show and tabloids and for Nick and Jessica TV show and tabloids.

But then the PHD brings in the big guns: somehow this whole marketing plan ends up solidifying sexist  cultural norms regarding husband and wife roles. In other words, the wife usually gets slotted “in her place” attempting to submit to the husband.  When I think of this theory in terms of Liz Taylor, it’s interesting how hard she seemed to fight that exact subservience.

In Cher’s case, she could be feminist on the show with her suggestive banter, but be a proper wife and mother off-camera. In fact Corsbie-Massay credits Cher with helping to “spearhead the women’s lib movement” on air and I would agree with that assessment. Through image and attitude and the show’s opening duologue storylines, Cher made a statement of breaking out of subservient roles, no matter what the private reality of their lives was behind closed doors. In the draft I read, Corsbie-Massay says Cher's “role as a feminist icon is obvious.”  But here is where I think Cher actually gets short shift and is not often enough acknowledged for her role as a 70s independent feminist icon.

Corsbie-Massay provides a very interesting reading of Cher’s pre-variety-show biography with all it’s politics, counter-culturalism and early marketing strategies. And  her research weights on Peter Bogdanovich’s article from 1966 in The Saturday  Evening Post, one of the first scholarly-toned and critical piece on Cher. I know...Bogdanovich can be annoyingly cerebral and pompous, but the article is certainly worthy re-reading and an important piece on Cher, not only for the controversy regarding what it says about S&C but for that controversy’s impact on Cher and Bogdanovich’s relationship when he directed her in Mask.

It’s also interesting when Corsbie-Massay  discusses how S&C were different than Nick and Jessica, how they embraced their physical flaws and ethnicity (whereas Jessica and Nick tried to snuff theirs).

In the initial draft Corsbie-Massay also briefly discussed how Iranian women associated with Cher’s "swarthy complexion and powerful presence" and how they emulated her. I am dying to know more about this. How did their television show get to Iran in the first place? And Cher’s influence on women of color is also grossly under-evaluated.

Posted at 10:54 AM in Peripherals, Scholarship In Action | Permalink | Comments (1)

the last paragraph was interesting, BUT!!!!!
ENUFF IS ENUFF ALREADY.....