Recycling Cher
The Bf of Cher Scholar Speaks Out 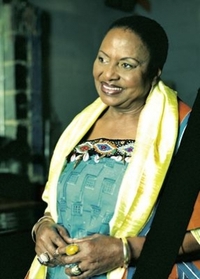 While I was in Paris, I saw nary a piece of French Cher product. Not for lack of looking for it once in a while. However, I did score a Miriam Makeba CD called Reflections from 2004. It consists of remakes of her most famous or favorite songs. As you know, on the 1968 Cher album Backstage, Cher covered Makeba's "The Click Song."

The remake of "The Click Song" on Reflections is lovely, modern and fresh. As are her remakes of "Mas Que Nada", "Xica De Silva" (a very kewl song), and "Pata Pata." Those are well-worth the album price. But the two jazz songs at the top of the album are quite dull (but note, I’m normally annoyed by any percussion sound that comes from a thing that looks more like a brush than a stick) and the feel-good pop-African songs at the end feel like filler.

I learned more about Makeba in the liner notes. She was banned from South Africa for her speaking out at the UN against Apartheid early in her career and lived as an ex-patriot in Guinea West Africa for many years. She recently opened (circa 2004) for Paul Simon's shows.

She'd be worth checking out.