I want to take a moment to finish up reviewing bootlegs Cher peeps have sent me. Regarding the 60s set I got for purchasing two posters off eBay, I have three clips left. I also just received a new and fabulous DVD from Jimmy (aka gypsy90028) that I’ll start discussing, as well. The Smothers Brothers
Most of us have seen Cher singing “Alfie” on this show. I never ceased to be amazed by Cher in that short baby-doll dress.

The Jerry Lewis Show
Now this show had some cool effects with background projections and whatnot and Cher arrives with BIG mascara. Things have clearly gotten out of hand in that regard. S&C sing “What Now My Love” and you can see Cher is definitely more confident these days. Lots of finger snapping goin down. And doesn’t Cher have skinny legs though? 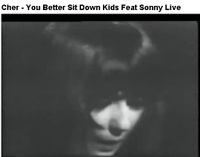 Are they lip synching again? Cher gets ready to sing “You’d Better Sit Down Kids” introducing it proudly as a song “my husband wrote for himself.” I was reminded watching this clip how unusual the song is being about broken homes and change and all, that painful moment when a parent has to explain divorce to their kids. Have you ever heard anything like it...before or since?

Glen Campbell
We’ve already seen the super-fine duet of Cher singing “All I Really Want to Do” with Glen on his variety show. If not, get his latest DVD. It’s fabulous.

On that episode, Cher also sings “The First Time” in a set looking like a bedroom after a cheap one night stand. Cher’s eyelashes have improved. And she's growing out her bangs….they look like little orphans, uncut and running away.  She gives Glen a big smile and he asks if Sonny produced that song. She again proudly says that he wrote that song and doesn’t someone in there say “and he can cook too.”

Then things really gets crazy with Neil Diamond. He’s just become successful (and it now occurs to you 40 years later how rarely you see him on TV). Cher is in an Indian top and they all three do a medley of Diamond hits up to that time, which include “Thank the Lord for the Nighttime" (full with emotive 'Oh Yeahs'), “Kentucky Woman,” “Brother Loves Traveling Salvation Show” and “Sweet Caroline” which we only recently found out is about Caroline Kennedy. Come on, Neil! That ruins it! I thought it was another song about booze all this time! Black Rose on Midnight Special
I had never seen Black Rose in action. And I loved it. I was amazed by it. This is honestly a side of Cher no-one gets to see. It never appears in biographical footage and it's a phase of her career mostly ignored. And even though I would accept the critique that Black Rose was no great shakes when you stack them against Hall of Famers, they was fairly a good enough new band that could've stood up against other new bands out there.

Because it was Cher’s third or fourth or fifth (according to your timeline) incarnation, she brought all her former incarnations' baggages, infamy and expectations to the act which was unfortunate. Had Cher started her career entirely with this band, they may have evolved and succeeded and we’d probably see Cher as a respected rock singer today alongside our other stellar rock chicks.

And this is one of the many instances where Cher had to pay her dues (not with drugs or alcohol or poverty, but with no respect); and it also exemplifies ironically in reverse why she should be a hall of famer because she took such risky risks musically in almost every musical genre and survived some huge failures but prevailed to bigger and better successes down the line.

Her rock moves here are fully and faithfully performed in “Never Should’ve Started.” Physically she dances with hard rock enthusiasm no one had seen before and would never see from her again. She rebelliously sings the word 'bitch' in the song “Julie” and tries to sing eye to eye with Les Dudek in “You Know It.” However, he’s no Sonny. Like Gregg Allman before him and Richie Sambora after him, no "real rocker dude" seems to have the balls to sing while looking Cher dead in the eye so intently as Sonny did. But she kept trying.

For Cher, loving you must mean singing live with you.

Something bothered me throughout the three songs on Midnight Special: who the hell is that guy on the left, the backup singer. He plays air guitar as if he’s the main act. And yet, with that tight shirt, he seems more like a dancing bodyguard than an actual band mate.

And I know she’s trying to dress down now but is that a hole fit she’s wearing under that sweat shirt?? I think I see a sequin.

In any case, out of love for rock music, Cher wanted to be in a band against her career's common wisdom. And she had enough conviction to try to sublimate her image and name to try to make it work. However, as we all have come to now know: such a thing is ludicrously impossible. And that’s probably the idea at which most of the ridicule started. Therefore, no one give the act a fair, pure looksee.

See? Even Wikipedia considers it "a Cher album" 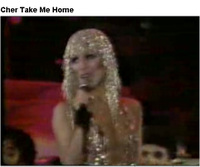 The Monte Carlo Show
This DVD also included the Monte Carlo show in its entirety, something I'd never seen before either. I’d been surviving ravenously from clips online. I was so entranced when I watched it I didn’t even take any notes. Now looking back, I must say honestly it felt a little rough compared to Celebration at Caesars a year or so later. Caesars was so smooth and slick and it had that big awesome shoe. I feel the Monte Carlo show stumbles starting directly with Laverne. We expect the big Cher entrance, not a fake out. The fake out with the drag Cher is much better played after the intermission, as Cher did it during her Heart of Stone tour.

However, I love, love, love the outfits in this show. And the dancing makes me nostalgic for the late 70s and early 80s. That encore crotch shot was scandalous! I played it for my bf when he got home!

What really fascinates me is the stupifying contrast between Black Rose and Vegas Cher in 1980. Consider with these: 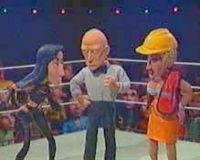 I’ll be brief this week as I am in the midst of some dark nights of the soul this week over my writing non-career. However, in the midst of all this, one thing made me laugh out loud this week: a site simply dedicated to the absurd photos people post online of their cats with stuff on them (toys, boxes, you name it). Ridiculous but surprisingly funny. The site is called Stuff on my Cat. This weeks Cher reference was unusual and hilarious. Not what people normally pick on Cher for:
http://www.stuffonmycat.com/index.php?itemid=7900

My credit card bill came this week with $500 dolares of Cher tickets on it. This did not lighten my mood any.

Chastity’s birthday just came and went. Like me, her 40s are looming nearby. It seems mum may be buying her a stylin’ lounge chair or  barcalounger as a gift. I’m trying to talk my bf into one of those. He wants to get rid of his couch for a mission-style recliner chair which looks lovely but very uncomfortable. This is a guy who likes to nap and I envision him abandoning the lovely mission-style chair and hijacking my couch every night to nap on while I’m stuck on a very lovely but uncomfortable mission chair, unable to nap myself. Thus I’m lobbying hard for the recliner. But alas, he feels too refined to recline.

Anywho, TMZ was apparently on the scene of the Cher and Cher-daughter shopping event, taking video through the store window no less.  Creepy. And yet we watch.

Cher’s competition and supposed rival, Bette Midler, opened her Caesars show this week. I’m interested to see how they will compare:

And here’s more on the story that the Cher catalog was part of the song titles of Universal sold to a Dutch civil service workers pension fund. I’m sorry this wont be turning up as a 401(k) choice for us.

Posted at 12:55 PM in Cher News, Concerts, Peripherals, What This Really Says About Me | Permalink | Comments (3)