Cher Odds and Ends
Rejected Blog Title #4: And The Blog Goes On

Some Enchanted Evening in Azuza... 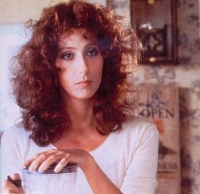 So it seems Mask has gone Broadway like Witches of Eastwick and become a musical. Except not on Broadway, at the Pasadena Playhouse. I don’t have high hopes though. I saw a terrible California-ized Shakespearean play there a few years ago.

Tickets range from $48 to $66 and previews start March 12 with the official opening set for March 21 through April 20. For more information call (626) 356-PLAY or visit www.Pasadenaplayhouse.org.

But alas...I could be wrong. The music was written by our friends Barry Mann and Cynthia Weil. They wrote "Holy Smoke," as you remember from my previous blog.  And other Cher tunes of the late 70s, as well as the 60s hit "You've Lost That Lovin' Feeling" and the 80s hit  "Somewhere Out There."

Anna Hamilton Phelan, who as you know did the Mask screenplay, is involved again in this project. Did you know she also did the scripts for Gorillas in the Mist and  Girl Interrupted. Tony-Award winner Richard Maltby (creator of Ain't Misbehavin' and Fosse, and the co-creator of Miss Saigon) directs.

...including this good quote from Phelan (from the production notes):

"When I was researching the screenplay for 'Mask,' I entered the world of The Tribe. After the

release of the movie in 1985 I remained friends with them, especially Rusty. As the years passed Rusty became more open about her feelings, especially about being Rocky's mother. When I told her I was going to tell the story again, but this time as a musical play, she was thrilled. My subsequent visits with her in her trailer in Azusa unearthed a treasure of rich material as she continued to share her memories with me. I also learned that biker clubs as far away as Missouri had 'adopted' Rocky as a kind of mascot. Some had his initials painted on their bikes.

"The last time I spoke to Rusty was a few weeks before she died in October 2006 at the age of 70. She was driving her chopped, three-wheeled motorcycle to a Narcotics Anonymous meeting. One of the back tires fell off, she was thrown and hit a curb. I'm sure she was saying to herself, 'What a bitchin' way to go!'

"I regret she won't be in the front row at the opening as we had planned, but I know she would have been grateful, as I am, to the Pasadena Playhouse for giving me the opportunity to tell this story a second time”

So maybe there will be more insight now with an expanded story.