Lots of new news clips to watch
Cher on Grammys

I know it's difficult to look into our Cher past when Cher future is so gloriously in front of us. But before the Vegas news broke, Cher Scholar JimmyDeanPartee (gypsy90028) contacted me to discuss the song from Cher’s 1979 album Prisoner “Holy Smoke” in order to see if this piece was still relevant to our troubled modern times.

With the political climate being what it is (see the Ben Sargent cartoon above): an unwanted war, soaring gas prices, the mortgage collapse, stock market woes, US religious-unrest – I do believe it is time to re-explicate this work composed by Michele Aller and Bob Esty. Maybe it will reinvigorate your ambitions to join the political process this year. Remember, it’s your right and it’s your duty.

I mean...come on, people died for you (not only in this war but back during the Revolution). Show them some love for your country and vote. I’ve never missed an election, even the stupid silly ones filled with Arnold Schwarzenegger propositions. 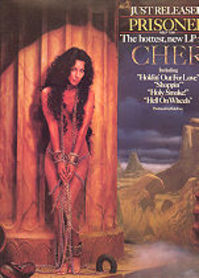 Where do we draw the line
on what's going on

Talk is cheap
Won't get the problems solved

(Seriously, TV talking heads are not my biggest pet peeve. My real rage comes over those news sources who just print competing lies and fail to investigate the truth of any claims politicians make, giving American yokels the dangerous luxury of continuing to believe whatever cockamamie thing they want to. Case in point was a recent article on Yahoo! News where John McCain accused former Republican candidate Mitt Romney of flip-flopping on issues and Mitt Romney then denying it. No attempt was made to root out a very verifiable truth there: how often Romney did flip flop. Yahoo just presented both statements like a free outlet for them to do a pissing match, lie for lie. Talk is way cheap.)

We're in too deep
Not to get involved

(If you think gas is expensive now…)

We got the sun for free

(I never knew that’s what that line was. I guess I always thought it was: we get this song for free.)

So explain to me
Why gas is up a dollar

(Well, you can holler but as we’ve already ascertained: talk is cheap. Hollering is hillbilly.)

(That flower-power rhyme sounds hippie-ish; Rush Limbach might accuse this song of being a left-wing conspiracy.)

They say they found the answer
breathing causes cancer

(Okay I thought she was singing: the reed that causes cancer...like smoking reeds...I know it’s stupid; but I was nine when this album came out!)

Holy smoke
All I can say is holy smoke

Why do we turn away
from what's going on

(Because we’re lazy and celebrity obsessed.)

We'll ever believe again
in those who hide the truth

Fifty-five or faster
could drive us to disaster
Holy smoke

(I think Sammy Hagar would see the sarcasm in that line, too.)

Holy smoke
All I can say is holy smoke
Holy smoke

Where do we draw the line