The Latest News Clips
(as posted on Cher groups)

Honestly, a good source for the latest Cher clips is always Cherworld.com. It’s an amazing Cher site that fishes out the late-breaking Cher news so you don’t have to. Cherworld’s on it! 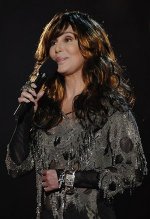 • Farah Fawcett’s cancer treatments with embalization and cyber knives
• Dangerous pug-faced paparazzi
• Cher’s good genes
• Cher’s good ex-boyfriend Gene
• Sonny ghost
• Cher's Elvis teen crush (and she still didn’t go to Vegas with him?? Imagine if your teen crush invited you to Vegas for the weekend. Tell me, who is it? Would you go? I just got over my teen crush...last month. So no, I guess I wouldn't go now.)
• Cher’s good health habits with the succinct quote: “I never saw drugs do anything good for anyone.”
• Her other tips for longevity including love well...and often.

So, it irks me that latest press reports state Cher is set to record her 27th album (one source even said 25th). Not to be a Cher nerd (too late), but It's only 25 when you only count studio solo albums. But why leave out Sonny & Cher, Allman and Woman, Black Rose and the live albums? It’s so much more impressive to say she's starting to record her 36th album (which includes the three major live albums and the Good Times soundtrack album --with all its original material-- but not Chastity because it was mostly instrumental.)

It's all about me

And this Cher nerd is feeling a little wiped-out and overwhelmed at the moment. Basically too much going on right now and I need to simply simplify. Helping my parents with their reunion/50th Anniversary party this summer, planning for my trip to Paris with the bf (which includes brushing up on my French, planning our itinerary and buying suitable non-American looking clothes so I wont be ostracized as a tourist), working on a somewhat large poetry project, and studying Spanish, Information Architecture (and now Project Management) for work.

I’ve had to put off my second class in ceramics for the time being. Which smarts.

At least Valentines Day is a hurdle that has passed. My bf and I have really sorry luck on romantic holidays including anniversaries. This year traffic made my bf late and our restaurant had some crisis and couldn’t seat anybody. After hearing angry comments from other couple’s left waiting in the lobby for 40 minutes, we left and went to a Mexican dive (my favorite, Rosa's, on PCH). But overall, better than some fiascoes of years past. This year I got my bf a slew of chocolates and a singing Johnny Cash card. I also bought a singing Sonny & Cher card for myself. They were $4.99 each. The S&C card said:

Inside: we got the love.”

And then the card played:

Really loud. Honestly, it was lame. I guess it’s important to have it for historical purposes. To document the crap our Hallmark society puts out. I hope the estate of Sonny Bono received a good chuck of that $4.99.

Grammys: What are you wearing?

For more information on Cher’s outfit last week at the Grammys, visit Julia Gerard who designed Cher’s fitted skirt. J. Gerard holds shop on Melrose Avenue in West Hollywood. My obsession with the show Project Runway makes me wonder if Cher would like Jeffrey Sebelia from last year.

In the Feb 10 edition of the La Times there was a full-page ad that said:

I almost got excited until I noticed it was in the same Cher font as used for the Farewell tour and Living Proof. This goth font has been used for so many years it’s becoming like that Barry Manilow font he on all his albums from the first one in 1972 to the Even Now album in 1978. It was a butt-ugly font, too. Cher’s font is not butt-ugly but it does make me worry that the Vegas show will recycle things. I saw the Farewell show about…um….5 times. Which seems like a lot but in Willie Wonka terms is like that scene when Charlie was in class and asked by his teacher how many Wonka bars he had

bought hoping for a golden ticket and all the other kids were like “you only bought two? How insane is that?” and Charlie felt like a dolt. Well, that equates to how I feel when I tell other Cher fans I only saw 5 or so farewell tour shows. But believe me, five was enough. Nothing changed except an incredibly shrinking set list.

All I am saying is that I yearn for new font assets. It’s not that I hate these goth assets. They’re strong and ballsy and look like they’ve been around for centuries. What’s not to like?

This all may sound crabby but I’m really looking forward to this year’s show. I hope to see lots of stupidly large headdresses. Headdresses like in Celebration at Caesars – so big Cher could only make it down a few steps before cute male dancers are forced to come to her aid.

And is Cher at the Coliseum really the official title of the show? Not quite the pizazz of The Showgirl

Must Go On or the simple artistry of The Red Piano.

Posted at 11:55 AM in Cher News, Concerts, Television, What This Really Says About Me | Permalink | Comments (3)

Cher’s one of my favourite artists. She is brilliant in many fields but for me I do love her as a singer and her way of singing does attract me. Since Cher has thousands of fans like me, it becomes so hard to get a ticket for her concert and prices always are sky rocked. I come to discover an interesting site where they offer a free comparison of ticket prices. And it’s really a good idea. One could look for the cheapest tickets.
http://www.ticketwood.com/concerts/Cher-Tickets/index.php
We could not be mean when we’re talking about our favourites but thriftiness is good.

Awww I guess you have to be old like I am to appreciate the I Got You Babe card; but I thought there could have been a photo of S & C on the front of the card or as wallpaper~

Thanks for giving Cherworld.com such a great wrap. We work hard to bring you the latest Cher news, your Cher blog is great! Please visit the new Cher Las Vegas site at http://www.cherlasvegas.com