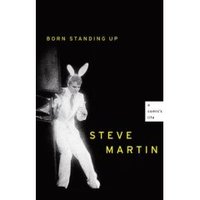 Imagine my glee finding Steve Martin’s latest book, Born Standing Up: A Comic's Life, sitting in a stack at a Santa Monica bookstore and discovering that it was not another piece of fiction but a biography about his long-lost life as a stand-up comedian. And here I’ve been kvetching so much about his abandonment of the art form for more well-heeled work in academic theatricals intermingled with big-budget, saccharine movie turds. (I’ll take fifty Lonely Guys any day if we can just forget that movie with Queen Latifa ever happened.

My brothers and father would re-tell scenes of The Jerk at the dinner table. I knew the entire “he hates cans!” routine before I ever watched the movie like I knew “it’s only a flesh wound” years before watching Monty Python’s Holy Grail). My brother also had the King Tut Martin Steve Martin album which we both loved (the embezzling cat story, the France bits). However, my admiration of Martin didn’t survive past the movie Roxanne, which was so sweet it hurt my teeth. And his appearances on SNL and talk shows struck me as cold. Then he did that great Oscar hosting job and I was back yearning for his old days of stand up. Then the bad movies with too many weddings and kids and Goldie Hawn romances happened and I was put off again.

Let me tell you, Martin's new book did wonders for showing a much warmer human being. And it’s a recommended read for his insight into how a comedy act is assembled, structured and crafted over years of sweat and experimentation, also delving into what it feels like on the other side of 40-thousand fans who know your routines by heart.

Good enough. But then it was announced that Steve Martin would be talking with Carol Burnett at a special event in LA at hosted by the group Writers Bloc. I was in heaven!

The theater was huge; the event was sold out so we had to sit in the balcony where I was too far away to ask my big Steve Martin question at the Q&A, which was: As a writing team for The Sonny & Cher Comedy Hour, why didn’t more of Bob Einstein and Steve Martin’s early-70s brilliances end up on the show? Sonny & Cher’s show is now remembered as an amazing variety show...but not for its comedy. It’s loved for its eclectic guest roster, Bob Mackie costumes and torch musical numbers.
Even the opening monologue (the only comedic bit every discussed today) mostly succeeded on S&C chemistry.

Cher’s deadpan delivery is much-ballyhooed and somewhat interesting in a nightclub setting but not brilliant by any stretch of TV variety rubrics. In fact, her deadpan serves her music more effectively, which I talk about in my Cher Zine Vol. 2.

And Martin was working on some cutting-edge material at the time; his own act was about to explode. Bob Einstein was already doing Super Dave Osbourne on The John Byner Show.  I just don’t get it. What the heck happened? Did Martin and Bob hesitate to even share the more progressive comedy pieces or did they hoard their best stuff? Did producers Chris Bearde and Alan Blye or even Sonny Bono veto the more risky ideas? The Sonny & Cher Comedy Hour could have been so much better. Or maybe Martin would have been more successful working across the hallway of CBS Studio City writing for The Carol Burnett Show.

Who’s to blame? I want names.

Asked what bits Martin did for The Smothers Bros Show (one of Martin's writing gigs before S&C), he joked that “all the best stuff you remember...I wrote that.” But alas, for the S&C show there was no best stuff. The comedy was weak and I can barely generate a chuckle or two watching it today. Carol Burnett routines are still interesting and often funny. But Steve Martin’s late 70s stand-up material as found on his records and movies like The Jerk – holds up admirably. It’s the definition of lost opportunity in my little book.

I imagine it was a difference in comedic taste between Martin and Sonny and others on the show. Because Martin never waxes happily about his experiences working on their show and mentions it rarely as even a career footnote. In fact, it’s the show that inspired the end of his television writing career. In his book, he only mentions the show with one anecdote and not a very positive one. He describes being approached by Sonny and his friend, manager, business partner Denis Pregnolato. They met with Martin one day to express an interest in developing a show entirely around him.

Which is an interesting idea because it hearkens back to Sonny’s phase of mega-media mogulship and also makes you wonder why he never did launch any other major show business project that didn’t involve Cher.

The sad thing was that Martin was excited about the idea and Sonny and Denis never brought it up again. At the end of the anecdote I wasn’t sure if Martin’s point was that Sonny and Dennis were hair-brained and couldn’t get 'er done or that they were never really serious about the venture in the first place.

At one point, Burnett explained how she wanted to share good comedic material with her co-stars and second-bananas Vicki Lawrence and Harvey Korman. She learned this on The Gary Moore Show, that spreading the laughs made the show stronger, hoarding them made the show weaker. This also reflects negatively on the Sonny & Cher shows where bit players like Teri Garr got not even bare scraps for punch lines. Garr mostly did non-stop set-up work as Olivia in the Laverne sketches. Once in a great moon Ted Zeigler would over-mug a joke but that’s about it.

The closest Burnett  got to mentioning The Sonny & Cher Comedy Hour, an immensely popular variety series at the time Martin and Burnett were working at CBS, was when Burnett rhapsodized about how much fun they were all having with all the variety shows in full swing in the CBS building. Martin only added a story about a nutty comedian he would always overhear in the bathroom.

As far as Cher connections, Martin also mentioned meeting Frank Oz on his Muppet Show appearances (Martin was on the TV show with Carol Burnett and in the inaugural Muppet Movie) and forming a life-long professional relationship with Oz who went on to direct some of Martin’s movies. Interestingly, Cher didn’t get along with Frank Oz on the set of Mermaids where there were rumors that Cher actually had Oz fired somehow. In any case, Oz left in anger and went on to direct What About Bob. Now although Frank Oz doesn’t sound like a great Muppet-of-fun-joy to me either, I have to be honest here, What About Bob was a funnier movie.

There was on irritating aspect of this “conversation” between Burnett and Martin and it was Carol Burnett. Press lead us to believe this would be talk about Martin’s new book. Burnett however seemed disinterested in interviewing Martin at best, dead set against asking any questions at worst, letting dead silence hang in the air instead of doing any work. She asked him probably a total of two questions, both lame. One question was who his favorite movie star was. This turned into an excuse for her to segue, with neck-breaking speed, into an anecdote about that particular movie star, Cary Grant and how Grant loved her show. Frankly, she seemed only motivated to tell Carol Burnett Show anecdotes about herself.

Her other question to Martin was about how he started out as a TV writer which only betrayed the fact that she hadn’t read the book or even done a quick IMDB or Wikipedia search for a brief timeline on his career.

To Martin’s credit, he made gentlemanly (as in gentle) attempts to keep the conversation going, respectfully taking the piss out of Burnett’s strange reluctance to engage in any real “conversation” about comedy. At one point Martin joked, “I DARE you to ask me a question.” She never really did.

And it pains me to complain about Burnett because she is one of my comedic idols along with Steve Martin and Harvey Korman. I believe The Carol Burnett Show was one of the three most influential comedies of the 70s (along with The Mary Tyler Moore Show and All in the Family) and a landmark moment for women in comedy and a variety show of superior quality. And she deserves to be knighted for that. But the truth is, she hasn’t done anything worthy of knighthood since then (although I loved her in Annie and The Four Seasons).

And I’ve heard all the Carol Burnett anecdotes many times, have taped all the reunion specials, read her autobiography (One More Time) her biography (Laughing Till It Hurts by J. Randy Taraborrelli).

Steve Martin has been far less available for public introspections of this kind. It would have garnished Burnett extra kudos for showing some interest in this comedic trailblazer she was sitting next to.
Instead she came off as Hollywood, as a self-absorbed scene-stealer. And too make matters worse, her anecdotes took too long to perform. She sunk too many details into each story, making sure we knew the name of every person in the business she ever worked with or talked to. I kept thinking “can we get back to Steve please?”

On the other hand, Martin was accessible and pleasant with the fan Q&As and showed true affection for Burnett. I wished he would have showed more interest in contemporary comedians, however, when asked for his favorites. His disinterest in even knowing the names of his most recent famous co-workers felt a little isolationist.

But I’ve come a far ways if that’s the worst thing I could say about Steve Martin. His book went a long way to showing a person with flesh and feelings, portraying a modest, thankful kid from Orange County after years of seeming affected and quietly arrogant.

View photos of the event.