'Do you believe' in life after rumours?
Cher in Cowboy Hats

Have Sonny & Cher ever played with the Stones?

This is my second installment on the fabulous 60s TV appearance DVD I received from a stranger in the mail after an eBay purchase: this is The Shindig Episodes.

On one episode we find S&C, Bobby Sherman, The Rolling Stones and lot of other peeps I didn’t know. First of all, Cher was in a jumper. A jumper! Sonny in a suit. They do a medley, a crazy jam…with the cast and The ROLLING STONES! 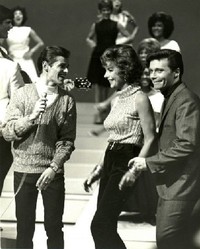 Could this host, Jimmy O’Neill, (right) be any more dapper?

S&C don new outfits where they sing “We’re Gonna Make It,” a clip that has been making the rounds of email and Cher list postings over the last two years; I reviewed this clip back in November - the highlights:

Here's a clip of Sonny & Cher singing "We’re Gonna Make It." Wow! First of all, didn't we associate that song with the Allman and Woman album. Sonny & Cher did it too? Just like "You Really Got a Hold on Me." Was Cher trying to recreate Sonny & Cher with Allman duets? It seems so beyond comprehension...or did Sonny & Cher cover so many friggin songs it would be impossible not to re-cover her covers? ...it would be hard to top this version. Bobby Sherman, that ridiculous dance, the screaming kids, the sudden appearance and disappearance of backup singers (if it wasn’t the 60s I’d think they were CGI’d in there), Sonny going absolutely crazy at the end. Wow!

The clip has since been taken off YouTube. (sad face) Find it...it's unlike any other S&C clip I've ever seen. Back in November, fellow Cher Scholar, Robrt Pela of the Arizona New Times among other things wrote to say:

I DON'T UNDERSTAND HOW THIS CLIP COULD POSSIBLY EXIST.

I mean, this looks way early, circa "Look at Us," and it just doesn't make sense that they would use crucial TV time at that point to do a song that a) they hadn't recorded and b) therefore weren't promoting.

How is this clip POSSIBLE?

This DVD brought me the answer to that very important and mysterious question: why indeed were Sonny & Cher wasting valuable airtime to scat? And Robrt was very astute to recognize the clip as a promotion for their first album. I look at all these 60s videos and get confused. Unless i see her bangs starting to grow out (see top pic) and only then I can identify it as late-decade.

Anyway, this was filler material for "I Got You Babe" promotion.  S&C do "IGUB" later in the show...with props. Cher is in one of her Good Times outfits, the ruffle-covered bell bottom outfit from "Trust Me" where she skips around LA. Interestingly, this Shindig performance of "IGUB" is excruciatingly shortened and you don’t see Cher’s face for much of it.

Sonny then sings "Laugh At Me." At first I thought it was his usual bad lip-syncing but then I realized he was trying to sing over the record! (Cher Scholar shakes head)

In the next segment Sonny dresses like Caesar and Cher like Cleo. I couldn’t place the song for the life of me but Cher looks great in her dress and they've got 'a look' even with her stringy hair and their big noses. It's fun to see Sonny make her laugh.

Then the host, Sammy Davis Jr., introduces the pick of the week, "IGUB," calling it a masterpiece and outa sight. Cher wears her union-jack-fit. Why does Sonny shake his head like that when he sings. Cher has an epileptic moment at the end and then PDA. Eewwww!

To cleanse yourself, you may want to look for Cher in this long ABBA retrospective video:

Although Shindig Cher clips are not available at the moment on YouTube, here is a hilarious Rollings Stones clip from around that time: http://www.youtube.com/watch?v=sXb5UL0dwLc

And before I was mentioning Teri Garr was a dancer on Shindig and Shivaree. Here's a pic (I think she's on the far right).