S&C on Hullabaloo and The Beat Club 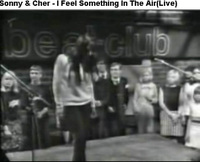 Whoops...I was wrong about the Sammy Davis Jr. medley last week when I was talking about Shindig. The Sammy Davis Jr. medley was from Hullabaloo and it was a Beatles medley. I blame my incomprehensible note-taking last December for the error. On Hullabaloo S&C join in the medley with "I Cant Get No Satisfaction" which just sounds silly. Later they join Sammy in singing "I’m Henry VIII I Am."

They also sing "I Got You Babe" live, Cher in one of her Good Times top and dancing with insane jerky movements.

My favorite of all of these 60s TV appearances has to be from The Beat Club. It’s so European! Cher is 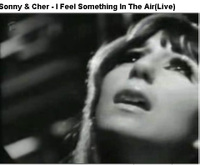 in a long-sleeved turtleneck. They sing "And Then He Kissed Me." The camera does a closeup of Cher’s moccasins and pans the small audience and I think kids today - err, yesterday! Sonny and Cher say something like "Danka" when they finish singing. This must be a German show. Those must be German youths. And are those bad German teeth?

Cher sings alone on "I Feel Something in the Air" – her head down like a morose teen. This is a very raw Cher performance. You know how the song (written by Sonny) turns in the middle? A sudden girl group song appears, then it’s a downer again with vague references to pregnancy, so vague as a poem it wouldn’t make it through an MFA workshop. I’m sure the kids were confused by it all but maybe not seeing as they were Germans. I like the crazy moodiness of the song and Cher is good at looking teen tragic. Sonny pops back in wearing stripes! Then the video cuts off as if Sonny’s outfit has caused apocalypse. 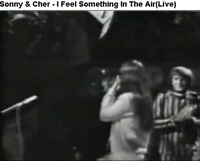