It's small but hey...it's my first year. 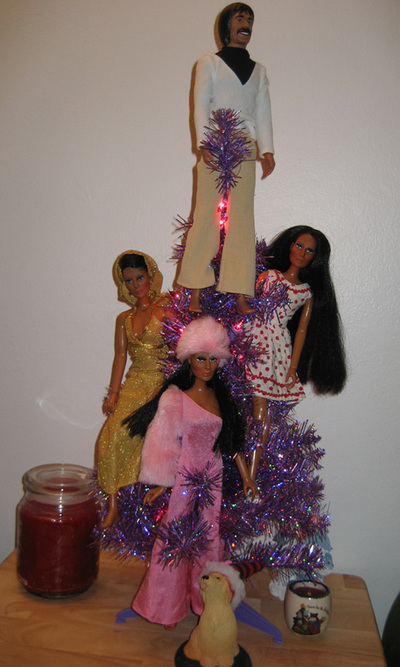 Posted at 11:08 AM in Night of the Living Cher Doll, What This Really Says About Me | Permalink | Comments (1) 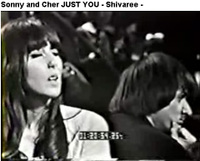 I purchased an item on eBay late last year and as a very special gift (RONCO anyone?) I received a DVD of old 60s Sonny & Cher appearances on shows like Shindig and Shivaree. Was I in heaven?! I kept looking for Teri Garr go-go dancing in the background (as she worked on these shows as a dancer between 1964-1966). I still think it is odd that Garr worked for years for Sonny & Cher in the 70s and never once mentioned running into them on those 60s shows. Because it seems like they made a ton of appearances there.

I’ll just start with the Shivaree episodes this week which were grainy on my DVD copy but wonderful to see nonetheless, amazingly raw. (The dancers are pitiful on this show, by the way.)

I watched two episodes with Sonny & Cher, one where they sat back-to-back singing “Just You” and then stood on a balcony full of dancing teens to sing “Sing C’est La Vie.” Cher wore a very conservative shirt, similar to what she wore on the album cover of Look At Us. Which is, quite frankly, a bizarre thing to see -- Cher in a normal teen piece of clothing. Nothing hippie-like or scandalous about that green t-shirt.

Cher also sang “Dream Baby” solo on one show (in some funky, skin-tight paisley pants) and “All I Really Want to Do” with some equally funky Cher-style dance moves. She seems very shy and young in these clips but does fine without Sonny. At the end of the Cher-solo episode it's fun to watch the credits where you can see Cher dancing in a crowd of guests -- in what looks like the last moves of anonymous carefree-ness she would ever make. So un-self conscious.

Cher doing “All I Really Want to Do"

I can’t find the Shivaree credit clips or the "Sing C’est La Vie" clip which is too bad because it’s ridiculous when the MC camps as a Frenchman. By the way, when I was first chatting with my bf almost three years ago on match.com, I found out he was a former Proust scholar. We hadn’t met yet mind you and he was such a effortless and enthusiastic emailer. I thought he was gay. Heterosexual men write really dull emails IMHO. Anyway, I told him Sonny & Cher were once really into the French. And he said he had, coincidentally, just borrowed a copy of Sonny & Cher’s greatest hits at the library and he was very bemused by the song "Sing C’est La Vie." I found copies of it all over the YouTubes:

Take a deep breath everyone; it’s a new year. Last year was pretty good I must say, bumps aside. Took some good trips, made some money for a change, experienced career advancement, published some poems, made some pots, blogged about the Chermeister.

Ugh. I hate when people do that to proper names. I really do. Please accept my first apology of the new year. So far, it has been an uneventful one. My boyfriend (who stuck with me through the last weeks of moving drama) was sick over New Years just as I was starting to get back into the groove after the move from Venice to Redondo Beach. I was a whiny lump of exhaustion the whole time. We now have a yard (a patch of grass just screaming “I need a dog”), a garage to store all my Cher crap in and an extra meditation/martial arts room. Ahhhh – so nice! Only bad news: no kitchen counter space. My mother will be upset when she visits this year but we will deal.

This was my major Cher-thought over the holiday as I was listening to The Very Best of Cher (I played it about seven times -- very much a coping exercise as I was hauling my own furniture down the Pacific Coast Highway in Bluebelle, my Chevy Cavalier.

The Cher-thought: Who would have guessed a match up between Cher and Giorgio Moroder would turn out to be so boring? I’m speaking of the song “Bad Love” of course from the Foxes soundtrack. I mean, what a kewl early-80s match-up to be made in a post-disco-pre-new-wave sort of heaven? It was such a particular musical era between Donna Summer and Duran Duran, a time where Flashdance was king Cher was mostly MIA. What a dud that song turned out to be. I don’t blame the songwriting skillz of Cher (which I kind of dig, frankly) or Moroder-magic. Solid building blocks for something off the charts, right? Am I right? I guess the irony is these gargantuan parts managed to sabotage the actual sum of those parts.

Posted at 12:44 PM in Music, Scholarship In Action, What This Really Says About Me | Permalink | Comments (1)