Life is sometimes cruel and unusual punishment. That’s all I can say. It’s seems you’re cooking along with gas and then suddenly the Universe squeezes your heart like a nerf-ball in its fist. How’s that for a mixed-up metaphor?

I recently moved as you may know. Now I normally find moving to be very exciting. I love packing up all my crap in boxes completely unlabeled so I can open them weeks (or sometimes months) later and exclaim, “OMG, I forgot I had these pot holders with irreverent and sarcastic sayings on them!”

And this move was exciting in its own way. Aside from the hard deadline of find-a-new-place or risk-losing-a-chunk-of-relocation-cash, aside from the fact that the move from Venice to South Bay killed all my plants, and aside from the half-hour break up with my bf, I actually enjoyed perusing Craigslist, The Daily Breeze and Westside Rentals for new places and driving around new neighborhoods.

I actually discovered one frustrating thing about Los Angeles; it’s getting so crowded and expensive that everyone is building rental houses in their back yards for extra cash. We never knew when were answering an ad for a “house” whether we’d end up touring someone’s former one-car garage. One landlord had her married daughter with a newborn baby living in such a former garage in the back and they actually wanted us to pay all their utilities because “it was too much trouble to split the single-home meter bill.” Oh, we met many interesting landlords last December.

But the moving itself was fine, although it rained for most of our week-long move and we had to finish over Christmas. That turned out to be okay, too. In fact, it was one of my favorite Christmases, so stress-free in comparison to other years. I was more than happy to receive less presents and instead fully appreciate unpacking all the stuff I already had.

We ended up finding a nice little house to rent with a huge (by LA standards) private back yard. There’s even an extra room for pilates/yoga/meditation/martial arts – which seems either awfully pointless or particularly fortunate to me at this time as I’ve just scarfed-down a big Chipotle burrito with chips because the Ralphs supermarket near my work was closed today for a half hour and I couldn’t get a salad.

In any case, we’ve been putting the finishing touches on everything, hanging pictures, purchasing a new washer and dryer, finally buying a bed. And then, after unpacking the last book and frying pan, the long awaited “dog weekend” arrived. Baby sitting The Edgar Winter Dog over the last year had taken a toll on what little mothering instinct I have. We really missed him when he went back to his primary mummy and I’d been ready to get a dog-of-one's-own for about 9 months.

I made various online attachments to dog pictures on websites for shelters all across LA as I waited for the weekend we would finally be ready. I even called a few rescue groups but they refused to even meet me after finding out my bf and I both worked full-time jobs. This infuriated me. My family and I have always had jobs and we’ve always had happy, spoiled dogs. My own former dog, Helga, had emotional and behavioral issues but I stuck by her, working all the way. She lived 16 healthy years until finally succumbing to kidney failure in 2004. She even ran for California Governor. Hell, my friend and former roommate and I passed rigorous applications from TV station Animal Planet and The US Humane Society to be on the show Who Gets the Dog, actually winning the right to get the dog at the end of the day. So I would say I’m most fucking qualified to adopt a dog -  with full understanding of the challenges and obligations.

Which is exactly the feeling that made it impossible for my bf and I to choose between the little black male terrier that looked like a cross between Taylor Hicks and Toto and the little white male Jack Russell terrier that looked like the RCA Victor dog. It felt like Sophie’s Choice and I felt guilty whichever way I chose. So my bf and I asked each other if we could adopt them both. We knew friends with two dogs and it seemed do-able. So we did it: we named the Taylor Hicks/Toto dog Franz and the Jack Russell dog Victor.

We got them home and they immediately commenced trying to kill each other. Victor seemed to be the instigator. We were disturbed but committed to the idea that we could become dog whisperers. My bf started reading Caesar Milan’s book and I started Tivo-ing his shows (except we don’t have Tivo; we have Comcast – which I call Crap-o).

The Edgar Winter Dog was over visiting for the weekend and he  gallantly tried to mediate, placing his

husky self in between the other two at all times. When they fought, he would look on sadly, sometimes putting himself away into the bedroom. Victor then bit my bf twice when food was near. Victor started behaving antisocially: not wanting to sleep near us, staring into space for long periods of time. We thought maybe he was shelter-shocked and starving so we decided to give him time, feed him well, and hire some outside help (maybe a few weeks of boot camp).

Over the course of the whole weekend, we tried to figure out a way to make it work. But as each day passed, the fights grew more intense and harder to break up. We all felt terrible and depressed. My bf started sleeping all day. Edgar stopped trying to play and once or twice even growled at Victor himself. And Edgar loves everybody. We felt sorry for Victor, like we were his only chance and we didn’t want to return him to the shelter.

I started researching Jack Russell rescue groups online to see if we could find him another home but couldn’t find any in LA. I did find a string of articles on how Jack Russells cannot live well with other Jack Russells or even other male dogs. One online story claimed a Jack Russell pet killed her other dog while she was at work. She warned readers not to think it would eventually get better between fighting dogs. We read that and became alarmed. Although we loved Victor (he had very sweet moments), we couldn’t choose to save him over the other two dogs, Franz and the occasionally visiting Edgar. So we reluctantly decided to take him back the next day. However, things ended even sooner when I sat down to eat chips and salsa which instigated a fight to the death between Franz and Victor. We couldn’t break it up and I ended up having to pull Franz out of the fray by the neck with his leash! And even then Victor kept attacking him in my arms. I ran from room to room trying to separate them but Victor was at my heels the entire time, my bf making futile attempts to cover him with a blanket to calm him down.

Finally I dumped Franz yipping into the office and slammed the door. Franz and Victor each started attacking the door! I called the shelter breathless explaining the situation and they said to bring Victor back. I cried the whole way there and as we watched Victor being lead back into the kennels. We told the shelter there had been food aggression but that there was a good dog in there, too. I felt I had to tell them about the aggression in case a family with little kids tried to adopt him. I was imagining some rug-rat getting bitten in the face after petting him while he was chewing on a rawhide. Even so, it felt very much like ratting him out.

Taking a dog back is a big bad thing where I’m from (“They’re not returnable merchandise”). I wasn’t raised to do that. It felt wrong and awful - but unavoidable given our limited resources that weekend. I felt abandoned for him. That probably comes from reading too many homeless dog novels from the Scholastic book catalog when I was nine.

I feel it was irresponsible of us to adopt two dogs on a guilty whim without doing our homework. 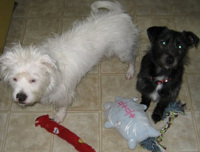 Come on: two male dogs? One a Jack Russell? Where we totally retarded? Victor, Franz and Edgar paid the price for our impulsive, thoughtless compassion. Definitely not something I’ll get over soon.

I'm sad for you. You're a good person for wanting to help small animals. (Also for liking Cher: Backstage a lot.)

MaryElizabeth,
what am i going to do with you??? Sweety, you think maybe you're trying to set up house-keeping to soon???I mean you just got that BF of yours a short while back, give it time and what with that move and all... AND, I loved all your curse words... I can curse, oh yeah!!!
YOU need some S&C relief and I am going to find those bootleg dvds I've been telling you about and send the bitches to ya'
REMEMBER, YOU live in CA and YOU have an amazing life, running here and there and doing what not!!!
Yes, I am on my 8th BudDry and Aminio Acids--where's a dealer when you need one, hun???
OH, and I'm listening to "CHER:Rare Tracks, vol. 2" and cruising guys on Craigs'List... Hopefully, some will show up soon...
I love you MaryElizabeth and all that you do for us S&C queens....
So, like fucking CHILL OUT!!!!
love and kisses-
jimmy
gypsy90028@yahoo.comj
yes, i, shamelessly, used your site for advertising.
CAll me a slut, BUT, honey call me....

Robrt, I feel guilt for that Backstage thing too. JDP, I like your curse words too! I really do. I hope I Found Some Blog helped you find more bloke last night than blow.