She's Been a Busy Bee 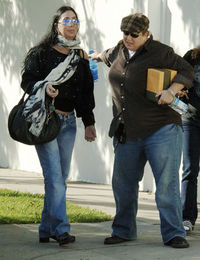 There’s been tons of Cher news lately. Cher had a fender bender in LA and actually behaved well for a celebrity. She left a note with her llongtime assistant/friend’s name on it. I don’t know where the press figured she was trying to leave a pseudonym (a very hard word to spell, btw); it seemed to me she was just trying to expedite the contact-me process. Was she on her way to the Osbourne's auction preview??

Cher also successfully threw her first Cher Foundation charity shindig last week and all seemed to go well. Although no word yet on how much cashola was raised. Where is the Cher Foundation website already?

Cher reduced the price of her Palm Springs house which is for sale. Sign o the times.

And there were reports that Cher’s personal trainer Angie Best had her second hip operation.

And Cher also contributed a designed kite for charity for Participant Productions. "The proceeds will benefit the Afghanistan Relief Organization specifically for the training of teachers and the construction of rural libraries in Afghanistan." Read the Press Release. Cher’s kite is yellow. The auction ends December 15.

And Cher was also seen out shopping with Chastity. Getting cash out for the Osbourne's auction I suspect: some replacement hanging wall crosses maybe.

It looks like Chastity is race-walking, but, dang, what would Sgt. Harvey say if he saw her now!