New Sonny & Cher Compilations
Has Cher lived up to her Oscar? (And is that a mean thing to say?)

The Internet, Video and Links 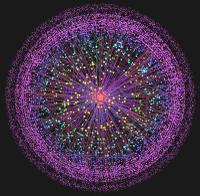 I don’t feel much like blogging today but here goes. Yesterday as part of a work excursion I attended part of ICANN's (Internet Corporation of Assigned Names and Numbers) 30th public meeting. You probably don’t know ICANN (and their name isn’t very sexy for sure) but they do things like run the Internet - make sure it works and isn’t hacked into and all that sort of thing. It was fascinating - the three session I attended.

The Internet is one of those things you take for granted but is so crucial to life in the modern world. My favorite quote from the meeting was from ICANN-ite George Sadowsky who said “All forms of human behavior have moved to the net and magnified.” And he went on to say how that included both good and bad forms of human behavior, saints and thieves. Do you consider how important the Internet is to your modern life and how crucial it is that it doesn’t break down?

I definitely feel mentally exhausted today. The energy there was calm but intense and now my brain is completely fried. Just listening to the translations was exhausting but very cool.

I’ll just leave you with these links for thoughts...

Cher single "Believe" was huge. Least we forget how big it was, this Today in Music article coves the basics, how it was the dance record of the 90s and probably the biggest selling dance record of all time.

Here's more news on Cher swearing on TV and whether or not that’s a good thing or a bad thing according to US courts. Ugh! I wish this story would just go away! I’m so friggin over it already. Grant on Ghost Hunters says "What the Frig!" all the time and I think it's so funny. My bf said yesterday that he was suffering from a bad case of the friggits.

Here's a clip of Sonny & Cher singing "We’re Gonna Make It." Wow! First of all, didn't we associate that song with the Allman and Woman album. Sonny & Cher did it too? Just like "You Really Got a Hold on Me." Was Cher trying to recreate Sonny & Cher with Allman duets? It seems so beyond comprehension - how could we have considered it? Or did Sonny & Cher cover so many friggin songs it would be impossible not to re-cover her covers? Of course, Cher and Allman didn’t make it, Sonny and Cher didn’t make it either but it would be hard to top their version. Bobby Sherman, that ridiculous dance, the screaming kids, the sudden appearance and disappearance of backup singers (if it wasn’t the 60s I’d think they were CGI’d in there), Sonny going absolutely crazy at the end. Wow!

The picture above is Bar Ilan University's map of the Internet. The Internet. What an awesome thing. Just this one post has brought us a blog conversation, a youtube video, factual information on a pop song and potential opinions blossoming out of billions of brains worldwide.

Pretty awewsome facts about Believe as a single and its mega performance on the charts....to think Cher has the top selling single for Warners ever!!! That should get her a little more respect from them. Remeber her quote that if any of her husbands had screwed her as much as Warner's she whould still be with them!!
HA!