Has Cher lived up to her Oscar? (And is that a mean thing to say?)
Thanksgiving Couture 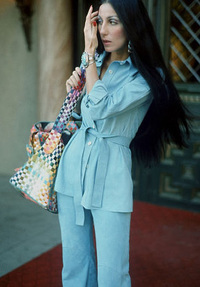 The shindig will go down November 28 in Century City and will include a VIP reception, dinner and a short film screening.  The movie will be Love Sees No Color (here's the 4 minute YouTube version) – which is described as something like a music-based peace film running at 12 minutes. I hope discussions will follow because that short program might send you to bed before Letterman comes on.

The press release alludes to “the screening and celebrity performance” but what exactly that celebrity performance is or which celebrity will be performing seems vague at this point. Remember Cher sometimes doesn’t show up to her own parties. I guess I know a hyper (and set-up) Cher fan or two who will post bank to find out. The event costs $500 for a plebeian ticket and 1k for the V.I.P. treatment.

Although I live here I must pass. If I had $500 spare dollars I’d own a third of a Bob Mackie sketch right about now. I propose five of us pick a presentable Cher fan to sponsor for $100 each. Their only obligation will be to obsessively report on the event to other poverty-stricken (in a relative European-US sense, that is) fans.

But seriously, this is really great news. Cher is amping up her charity profile and not making it Cher-centric – which fulfills a requirement that her charity work not be self-celebrity-obsessed. It’s perfect!

The movie actually highlights musician and peace activist Nassiri. You can read his vision statement and you can listen to his music online. It sounds uplifting. Allmusic.com describes it as lush, literate, hypnotic world fusion.

There’s also a pretty substantial review in the press release of Cher’s philanthropic efforts to date which include:

For contact information on these charities, visit http://www.cherscholar.com/cherstock.htm and scroll down to Cherities.

I just hope The Cher Charitable Foundation starts up a website soon so people can mail in some benjamins.

HELLO,MY NAME IS ROBERT WOOD, MY WIFE IS ELEANOR.IN 2006 I MADE A W / W APPEAL ON SKY NEWS FOR SOMEONE TO HELP US WITH PEACE VILLAGE SCHOOL,NOW KNOWN AS SHIKAMANA BUILT BY THE KINDNESS OF THE CHER TRUST.WE HAD CHER,S P.A.S NUMBER BUT LOST IT. WE WANT TO GET IN TOUCH WITH CHER TO INFORM HER WE HAVE NOW FOLDED THE SCOTTISH CHARITY WE FORMED IN 2006 DUE TO ILL HEALTH, AND AGE I AM 62 Y.O.A. ELEANOR IS 68 Y.O.A.CHER ANSWERED MY PLEA AND HAS DONE FANTASTIC FOR THOSE VERY DESERVING CHILDREN. WE JUST WANTED TO SAY A BIG THANK YOU AND GOODBYE TO THIS MOST WONDERFUL, CARING, LADY KIND REGARDS. ROBERT & ELEANOR WOOD.