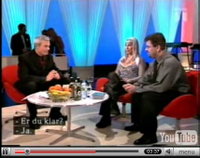 CherWorld.com posted this Cher interview from a Danish TV show circa Believe or rather at the last turn of the century. There were very interesting tidbits throughout this unique show. She talked about her interest in fashion and childish things. It was interesting when she said she didn’t care about not knowing things she didn’t know and that she would describe herself in a few words as “on the brink.” Very interesting.

I was surprised to see her play along with the show’s little reindeer games and so good naturedly, too. Although she did seem a little stiff, as I would expect a star of her stature to be, a star of her longevity and old-Hollywood temperament. I was surprised she hadn’t met Bill Clinton or been to China. I keep assuming, despite her claims otherwise, that she’s met everybody and been everywhere. She said it’s a sin to have it and not use it and that she doesn’t like oysters. I love this show for digging up pointless facts like this, I really do.

And then she lip synced "Believe."

There was one point in the show where the interviewer asked Cher about Cherilyn Sarkisian. That person is non-existent; haven’t seen her in a coon’s age, she said. (This is actually generational Americana speak I cannot translate). I thought how sad that sounds. Cher likes childish things but not her past child. I did a little tsk tsk.

Maybe I was being a dolt or maybe I was just re-enacting my own innocence-to-experience drama, akin to a Sonny Bono song about cowboy games.  I truly thought for a minute that I loved my former child self. That kid was adorable and so able to entertain herself herself for long periods of time. 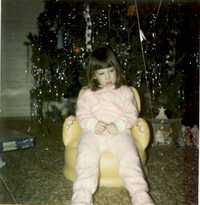 Then I went to my high school reunion. It was no disaster by any means but it was just okay, mostly depressing ‘cos nobody showed up I was looking forward to seeing. But that wasn’t the worst of it. Later on after the reunion in our hotel room (the fabulously kitschy Cheshire Lodge), after John had fallen asleep, I read my "Senior Destination," my prediction for my life 20 years down the line. I got mildly excited thinking I would see a heart-rendering clue into the fabulous person I became, a hint of the impending launch into an adventurous 20 years.

It was all about poppin’ out babies and being June Cleaver. I was crestfallen. Who was that person?? It was alarming to me that I didn’t even recognize myself. I guess only my pre-teen self was so adorable. That teenager, she was a blank slate. It’s not that I judge a life of homemaking. It’s just that I so completely changed, I forgot who I was. And then I mourned the loss of both my old friends who didn’t turn up and the girl-in-me who couldn’t yet see her true nature.

Read more about my reunion and see photos from our trip to St. Louis on Ape Culture.