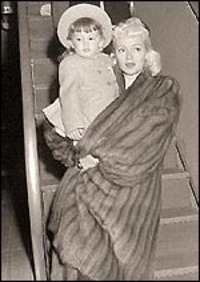 Cher's birth name is known in biographies to be Cherilyn Sarkisian. I don't feel up to figuring out the mess of her adopted names, including that mess of a name she used circa meeting Sonny Bono. It's never spelled the same: La Pierre/La Piere/Lapierre/Lapiere. Like Susan Sarandon in Witches of Eastwick - sometimes I just can't face it. Sarkisian is Cher's Armenian father’s name. Remember what Dyan Cannon said to Al Pacino in the movie Author! Author!? All Armenian names rhyme with Armenian.

Cher's mother Georgia named her first daughter Cherilyn after Georgia's friend Lana Turner’s daughter, Cheryl Crane. Incidentally, Cheryl Crane murdered Lana Turner’s mob boyfriend Johnny Stampato in 1958. Thankfully Cher is not into mob hits of that nature. I'm sure there must have been a Georgia husband or two she didn't care for.

Ever wonder what the other Cheryl's up to? http://en.wikipedia.org/wiki/Cheryl_Crane