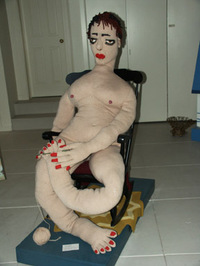 John and I and my friend Christopher made a trip to Ojai last Saturday to take the Ojai studio art tour – it was sort of a field trip for my ceramics class. We saw some kewl pottery (I bought a little Leslie Thomson pot which reminded me of Zuni pots I’d seen in New Mexico but much cheaper – I suppose because she’s not Native American), some amazing wood pieces, not so many great paintings unfortunately but there was much more to see than we could get to in one day.

The highlight was our last stop, a huge gated compound. We thought “Oh great! Rich bored woman tried to dabble in art.” But then we met Sylvia Raz  – she was an amazingly warm and funny person with a life story that was made our heads spin. Her parents were holocaust survivors from Russia aided by an Uncle who paid for all his siblings to escape but didn’t make it himself at the end. The uncle transplanted them to Montevideo, Uruguay. Inspired by her uncle, she became a Zionist and moved to Israel where she lived for ten years, experiencing three Israeli wars with a day-job being head nurse in a psychiatric ward.

You see a South American influence immediately but something seems different...a precise and non-equivocal Jewish voice. Her work is cross-culturally powerful, more vibrant and thought-provoking than anything we’d seen. She did some work in stone (a Madonna and Child in pullover and jeans!), but due to arthritis was now working primarily in clay and mixed media. She had knitted a giant woman who appeared to be sewing her toe. It was eve sewing herself! Eve didn’t come from Adam. Eve created herself! I get a shiver just thinking about it. Her latest projects use Barbie dolls in feminist commentary. My favorite piece was a male Barbie (not Ken) pushing a shopping cart full of inverted, disembodied Barbie legs. Amazing, amazing.

Due to an upsetting episode at the Vagabond Inn we ended up coming home a day early. I was depressed about that (no diner breakfast, no hike in the Ojai hills, no more art) and I spent the rest of the weekend moping and working on some Buddhist poems. I read an interesting story about Japanese tea ceremonies. Rikyó, founder of the tea ceremony cult in Japan, visited a man who brought out his best, most expensive tea pot to impress the master; but it was ignored completely. This greatly upset the man so he smashed the tea pot into many pieces and said what is it good for if it doesn’t impress the master? A friend picked up the pieces and lovingly and carefully glued the pot together again. But it had many, many cracks. Rikyó came to this man’s house and made much ado over the tea pot which he said looked familiar but now represented wabi or poetic poverty.

In another story, two men were having ceremonial tea and the guest noticed a vase was leaking water onto the table. He asked his host why he couldn't just fix it. The host said it was perfect just the way it was...because it had sabi or the pleasurable beauty of its weathered age.

This site has a nice description of wabi and sabi.