Chastity in the 'Bloids 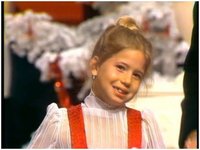 Okay--so the big news this week is that the National Examiner rag supposedly published picture(s) of Chastity and they say she's now 300 pounds. I haven't seen the article or these pictures. Not because I'm particularly 'bloid-immune, but I am so slow in getting to the 7-11 that the 'bloids have "turned" by the time I get there and are on to other stories like mutant babies from the deep void of space (i.e. Britney Spears). Okay that was a bad joke. But I've never forgave Spears' remake of "The Beat Goes On" and it has fueled me with with a sense of insuppressible vengeance. So who knows how true or false the story may be. The fact that it's a story at all is the most interesting aspect.

We as a celebrity obsessed nation seem to be way more obsessed with Chastity Bono than other celebrities of her ilk and she's had multiple stories in the 'bloids. Why should that be? Because she's young, an older sister of sorts for today's self-abusing starlets? Because she's famous for being the only child of a mega-star-couple? Because she was a child star herself?

Elijah garnishes an occasional news blurb due to some lunkheadedly piggish comment he makes on Howard Stern. But these reports usually surface on Internet news and hardly compare to the national interest Chasity receives. Other children of stars--even if they have reality shows like Rod Stewart’s son--aren't such big stories.

Cher's stardom is huge, however, and works on many levels: her products, her fashion, her love life and life story (which is what the tabloids hook into). And it's been so long since the nation has had a juicy Cher tabloid story. Are we so desperate for one that we’re seeking it in her kids?

On the other hand, Chastity was a legitimate child star herself. But child stars don't automatically get stalked by the rags either. Do we get updates on how Adam Rich is doing? No.

Chastity has never "gone Hollywood" and doesn't act like wanna-be-back-so-desperately PR-machines like other child stars. Even those folks aren't getting this kind of look-what-happened-to-them coverage. It seems Chastity is a phenomenon larger than the sum or her famous parts. And if Cher is accurate in describing her purity (did she make a punny there?) and high standards, it’s understandably an upsetting situation to live with, hence some coping mechanisms may ensue.

Overeating isn’t the worst as coping mechanisms go. Can we imagine how disturbing it is to be stalked by tabloid photographers and not be getting paid millions for movies or albums to make up for the inconvenience? Chastity should get a Cher-stipend for her troubles.

I think we continue to gawk because we like Chastity. We really do. We just show it in a very modern and disturbingly ‘tarded way.

Least we forget how icky the 'bloid breed is, here's an excerpt from the memoirs of one particularly nut-jobby paparazzi who talks at length about trying to ensnare comments from bereaving family members after Sonny's death (which seems to have been a particularly frenetic tabloid time for the Sonny&Cher clan: http://www.canada.com/windsorstar/news/story.html?id=c05fb318-300e-44da-bad1-de5dccaba3c9&k=60345.