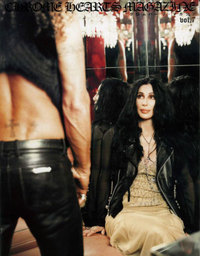 This snarky pop blog has a Cher sort with some nifty pics. They call her a diva-saur. That honestly made me laugh out loud. Remember the confusion between Lee Tergesen and that other long-haired dude with a cap she was huggin way back? Re-read up on the scoop here. It reminds me of when Cher once said she likes guys with a “street look.” I call it more of a “just out of prison” look. And what is that outfit she’s wearing toward the bottom with the plaid skirt and mini-skirt? It’s a cross between ho and hoe-down.

I found that site while searching online for more information about the Japanese magazine Chrome Hearts which Cher is now on the cover of. Copies going for 40 bucks on eBay. I just blew my wad on Cher dolls so I'll have to pass on this goodie.

I actually love this cover with Cher looking disheveled (not a common occurrence), giving the shirtless guy an alluring gaze. Does that work for us? Is this a play on Cher with the younger feller? Are we disturbed? And is this a double-standard disturbance? These are all questions I’m vague about so I have decided to quiz my bf tonight on what makes an mature woman sexy. And is this different from what makes an mature guy sexy. My knee jerk theory about why girls like older guys is that we are often under the mistaken impression men have finished sowing their wild oats by then, that they’re somehow wiser for the wear and not so erratic-like in the love department.

For women to be perceived as sexy, I have a feeling it’s a constant game of surrender and control. Typically with gals in the surrender role. But age demands a change. I’m just not sure how or why. I just know it's all very complicated and sexist.

By the way, Cherword.com did some fine reporting, as always, getting the scoop on this and other late-breaking, rare and trendy Cher news. I’m always impressed how on-top of it they always are in matters of Cherabouts. They do the leg work so we don’t have to.

Cher looks lovely in the photo...much less posed than her usual photographs. Reminds me of the Believe era but with better hair. And so voluptuous. And that’s comforting.

While I was back in Lancaster, PA, my parents, my bf and I watched some old family movies to find video of Helga, my former dog. He’s heard so many stories from friends about her very caustic, un-dog-like personality. We came across Christmas footage which included me looking really, really, really stick-like thin. It felt like a punch in the gut to see. It looked unattractively skinny to me now and I’ve never ever thought this about an image of myself. I am now “hippy” and trying to lose weight for my 20th high school reunion later this year. But my  whole life I’ve felt hippy and chubby. There’s never been a time when I didn't feel I could stand to lose 5 pounds.

Much to my despair, I was diagnosed (by family Dr. Vorhees) with anorexia when I was 13 or 14 years old. If I thought I was thin in this video! Jesus, I must have been all bones in junior high. But happily, I got better. Which is not something you usually hear about anorexics. They usually struggle over a lifetime. I’m thankful, believe me. I love to eat. For me it was mostly mis-education about dieting from listening to pop-star interviews and reading Cosmo issues with too much faith. I believed you could shrink your stomach and live on bean sprouts. But still, I do remember the very real madness that ensues when you willfully stop eating. Exhaustion, both mental and physical, moodiness, an overall sense of darkness, like the whole world is tinted over. Your head is full of conspiracy theories (why does everybody want me to be fat?) which leads to a scary kind of alienation from everybody.

I was heartbroken when my doctor told me what was happening. Karen Carpenter had just died. I couldn't even read the People cover story. I still remember its horrific blue cover. I knew at its heart that this was a madness I wanted no part of. I started eating right away (Lucky Charms as an afternoon snack), gained weight and then eventually learned, with the help of a nutritionist, how to stay thin in a healthier way. But that was a turning point in my life in many ways. I knew I wanted to be sane much more than I wanted to be thin. And whenever I have some weight to lose and I'm tempted to crash diet, I always ask myself the same question: would you rather be fat or crazy?

I surely feel celebrity culture affects our goals and desires and our self-image. That’s why celebrity obsession can be so dangerous. But Cher’s thin-figure never did inspire me to starve myself. It was rather people around me in class who were very thin...tiny body types mostly. The tiny Indian girl who sat next to me in science class.

All that bad flashback aside, I did have a great vacation...although traveling there and back was exhausting. It took us 17 hours to get home from Philly after we missed our plane due to excruciatingly slow check-in and security lines. My bf said we could have gone to Hong Kong by then. Poor guy. He endured a neighborhood picnic, a small town parade with veterans and fire trucks, a town faire with a hilarious baby parade, and poker with my unscrupulous family members. He also was introduced to the Ephrata Cloister, Wilbur's Chocolate, Gettysburg re-enactments, a Philly hotel fire alarm in the middle of the night, a fun tour of South Street, and ersatz history at the City Tavern. He was the new plaything for all the family kids and was dubbed Funckle John. He was also told, by my 10-year old nephew, that  he wouldn’t be allowed to come to our family reunion in New Mexico next year until he became “a Ladd.” I wonder if my mother put him up to it.

Posted at 03:37 PM in Cher News, Cher Outfit Watch, I Am Not My Hair (Inner Beauty), What This Really Says About Me | Permalink | Comments (0)