Cher Cartoons, Links and Movies
Believe it or not (a new mashup) 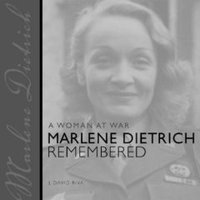 I finally bit the bullet and bought the coffee table book: A Woman at War: Marlene Dietrich Remembered as Cher contributed an essay to it. Cher was one of the few celebrities included among children of Dietrich, the son of Joseph von Sternberg, former GIs, producers, directors, biographers, a journalist and a jazz musician. Cher (listed as a singer/actress) is included with Burt Bacharach, Rosemary Clooney and Hildegard Knef.

Overall, the essay was packed with content. I really enjoyed Cher’s self-deprecation and passion about Dietrich. The intro paragraph commented that Dietrich always watched Cher because she was a fan of Bob Mackie's work and that Dietrich liked Cher’s tenacity and bravado.

Cher discussed her one sighting of Dietrich during a Mackie fitting, which Cher said often entailed standing for hours. Cher also admitted to shaving off her eyebrows like Dietrich during the S&C Comedy Hour. Cher said you can see a whole season of her with penciled-in eyebrows. This is a good Cher test: does anybody know which season this is?

The funny thing is another Cher fan Bruce helped me track down many of the Cher photo credits on this blog and he said you can do Cher-dating based on her eyebrows. It’s all about the eyebrows, he said. I think this definitely deserves further study – resulting in a possible timeline or PowerPoint. I will try to secure some grant monies for this effort.

Cher also admired Dietrich for her ability to "command attention," her ability to do comedy while being sexy, the way she used lighting to create an image of herself, and sustain a singing career without having a strong voice. Cher, a student of all of these attributes, even said “I don’t think much of my own voice.” That kills me everytime she says that!

Cher also discussed women having to be a bitch to survive in show business. She imagines Dietrich could be a bitch from time to time and Cher comments how "people around you often pay for it." You never hear stories about Cher being a Diana-Ross-style beeotch; nevertheless, I still hope Cher’s personal assistant gets a good Christmas bonus.

Cher also said “women like Dietrich, Bette Davis and Katharine Hepburn paved the way for me.” Not only is this true in a ballsy-image kind of way, it also hints to the fact that Cher has an old-Hollywood air about her, probably inspired by these ladies. And I think it’s definitely a facet of her longevity.