Chrome Hearts is Dy-no-mite!
So all of a sudden all these queens start pelting her with gum... 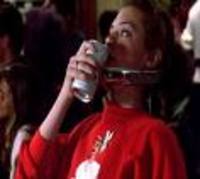 This week my attention was directed to the fact that I may have offended one of my readers in a post last week (the petition one). This is highly likely. And problematic as I consistently forget I have actual readers. If it’s any consolation, I’m sure I say offensive things about Cher and her posse all the time.

The thing is it’s awfully hard to objectively critique a celebrity (Cher) and a mass mental phenomenon (celebrity obsession) without stepping on a few rhinestoned toes. It’s simply part of the scholastic process. Doing this takes distance and a sense of humor. Especially because many, many celebrity obsessed people don’t have either of those things. So sociologically, the study absolutely requires it from me.

That said, when I take off that scholarly hat it pains me to think I’ve hurt someone’s feelings. Both because I’m empathetic to that situation and also for purely selfish, karmic reasons. Which is why I’m going to offer up (in the spirit of reconciliation) my own nutty story of embarrassing fandom.

The first thing I ever collected as a human being (circa early 70s) was Sonny & Cher records and dolls. But it wasn’t until I became a pre-teen that I started my actual Sonny & Cher scholarship. This was when I started collecting clips about them in People Magazine and reading their bios in record guides. Learning their birthdays was a big deal when I was in Junior High.

I was also making new friends who hadn’t yet wrapped their heads around my Cher obsession. Understand this was 1982. Cher was way past her disco hit and just shy of her movie career. She was in her has-been phase #3 (phase #2 being the late 60s, phase #2 being 1978, if you consider "Take Me Home" a comeback hit. If not, then we're talking about has-been phase #2...but that is simply a debate for another day). My new friends were cocking their heads and wondering, shouldn’t this young gal be into The Go-Gos and Survivor and other hits of 1982?

But my feeling was and has always been: can’t I be into both the trendy and the has-been? For instance, in 2007 I can fall in love with Patti Griffin’s latest song "Heavenly Day" (which I did yesterday) and still love Cher’s TV version of "Rhinestone Cowboy."

And it was with this resolve that I decided to throw a dinner party when I was 12...for Sonny Bono’s birthday on February 16. Now this really confused my new friends. Why is this 12-year old throwing a dinner party instead of the typical slumber party? And why Sonny Bono?

I didn’t even have Sonny Bono recipes. I just made lasagna and a salad. And as 12-year olds are often at a loss for good dinner conversation at dinner parties, ours quickly denigrated into a daring contest. Someone plunked bits of lasagna and salad into a glass of coke (only the finest beverages at my dinner parties) and the bravest of the bunch tried to drink it.

I’m sure none of my guests ever got over that night. And eventually I had to get all new friends entirely. Just to cover my tracks. But if I ever run for political office, that dinner party will forever haunt me.

So I don’t care what some petition-wielding Cher fan says I said about her. I’m nuttier.

These recipes claim to be inspired by Sonny Bono:

But if you want an authentic Sonny Bono dinner party, you might try to visit his eldest daughter Christie’s restaurant in Long Beach, California:

Posted at 12:00 PM in That's The Obsession Talking, What This Really Says About Me | Permalink | Comments (5)

Isn't Heavenly Day a goosebump-fest? Patty Griffin is an absolute godsend. You must get all her CDs. Impossible Dream is her darkest, and my personal fave. You'll be forever changed.

My neice was born on Sonny Bono's Birthday...Lasagna with a candle on it?

Yes...I have many Patty G CDs...she's a poet! My favorite songs are "When It Don't Come Easy" "Mad Mission" and "Sweet Lorraine".

You're not the nuttiest, Mary. Back in the late 70s when I was trying to acquire Cher TV show audio cassettes, I corresponded regularly with a girl on the east coast who claimed to have Sonny & Cher as regular visitors to her home. One letter to me started....."Hi Rob, Well Sonny just brought your letter in....

I am understanding to that circumstance and also for simply self centered karmic factors which is why I am going to provide up my own crazy tale.