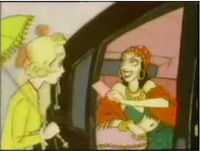 Some cool links came along while I was on vacation: Cher fan Tyler posted links to the John Wilson cartoons from The Sonny & Cher Comedy Hour that he found on You-Tube.

They may seem crude today, but back in the early 70s these toons and the slick transitions between S&C skits were really cutting-edge hot stuff for variety TV.

Tyler also passed along a memorial site for Patty Darcy Jones.  I've seen so many spellings of her name (even a variety on IMDB). I’m sticking to the version on the Cher albums.

I found a new type of celebrity news aggregator that had linked to this blog. You may find it handy. I’m a little overwhelmed (err....aggravated) with information aggregation at the moment so I’m not sure if I’ll use this or not. http://www.boxxet.com/Cher/best.box

July is the month of movies in LA! Not only is LACMA having a Katharine Hepburn festival, but the Cinematheque is hosting a festival called Mods and Rockers...full of 60s and 70s music movies. This is why I love living in LA –  rare movie screenings framed with nerdy talks by movie participants. You get rare opportunities to see filmmakers talk about their movies. Two years ago I saw Peter Bogdanovich talk about the director’s release of Mask.

Backstory: a month or so ago I was in a store on Main Street in Santa Monica and I came across a coffee table book mentioning Harry Nilsson and I thought about the duet he did with Cher in 1975, the one I blogged about as being part of Cher’s Phil-Spector oeuvre. I turned to my bf and one of us said 'Who is Harry Nilsson?' I mean...in the scheme of things.

So it kills me that I’ll have to miss this Saturday’s feature: Who is Harry Nilsson (and Why is Everybody Talkin’ About Him)?

Get this: one of the speakers after the movie includes Jimmy Webb! I have so many questions I would ask! Aaargh and double-aaargh. Webb produced Stars. I would ask him how the recording of that album that year was affected by the Nilsson single on the same label and what does he know about how that duet came to be, how it went and what Cher thought of it. It’s a perfect cross-hairs of Cher Scholarship and I’ll be missing it! *sob*

You might think I’d be having goiter surgery or something for missing this. But no: just hard-made dinner plans with some good friends I rarely see.

But on my birthday, (Harry Potter’s birthday too, btw), there’s another good movie regarding Cher history: Atlantic Records: The House that Ahmet Built. Which reminds me, my neighbor has a very kewl Atlantic Records coffee table book with some nice Sonny & Cher photos in it: What’d I Say: The Atlantic Story.

You can see a list of all the Mod and Rocker movies here:
http://www.americancinematheque.com/pressreleases/2007/ModsNRockers_2007.htm
http://www.modsandrockers.com/schedule.html

I'm dying to see that Nilsson documentary. He was so amazing....I have most of his music. Hopefully it gets a DVD release soon.