Woman at War
Women with Hips

Believe it or not (a new mashup) 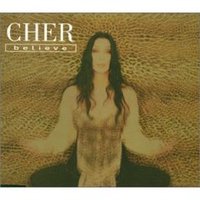 Last week a concerned non-fan friend sent me the news that "Believe" made Rolling Stone Magazine's list of most annoying songs.

I notice all the songs on this list were massive hits, thus probably most annoying due to being over-played. Some I’ve had the pleasure of never hearing. Some are sexistly annoying. Some are annoying just because people find Celine Dion annoying. And yes, some are probably inherently annoying. I’m going to remain silent on "Believe." It was never one of my favorite songs and it’s probably my least favorite among Cher’s iconic solo quad which includes "Believe," "Gypsies," "Half Breed,"  and "Turn Back Time" – although "Believe" gives "Turn Back Time" a run for the bottom spot in my list. I love "Gypsies, Tramps and Thieves." I really do. But it would have probably have made Rolling Stone's list in 1976.

Cher fan friend JeffRey sent me another mash-up of "Believe," AC/DC-ized. You know I love mash-ups! This helps alleviate the annoyance quite a bit.