This week’s news is that Cher helped her sister purchase a modest home in Malibu – which is not to say they paid a modest amount for it. I figure maybe too many girl fights ensued in Cher master bathroom and so Georgeanne and her husband had to move out. Or maybe Georgette ate the last dollop of Haagen Dazs one too many times. Cher World has the news post.

This is unfortunate news. Not because it’s bad news but because it’s not important news. Now Cher-sister and Cher brother-in-law will have less privacy and more Cher-peripheral gawking from drive-bys.

Peripherals, especially peripherals who have chosen to lead non-celebrity lives (okay, she married Michael Madsen first and was on General Hospital as a young lass...but that was years ago) should be afforded more space than peripherals who are seeking to crack the Entertainment Industrial Complex, as Maureen Orth might put it.

Interestingly, Cher and her only sibling seem to have a close, collaborative relationship. But I’m just not as fascinated by this aspect of Cher’s life, at least not as much as other celebrity-obsessed folk are. I guess if you were Cher’s biographer, these details would be crucial and I have no doubt (believe me) that family members play a role in your creative and business decisions to a far greater degree than we would all expect or like to admit.

So I’m not saying Cher’s relationships aren’t pertinent factors, they just aren’t particular interests of mine in a way that whatever arguments between Sonny Bono and Snuff Garret during the All I Ever Need is You recording session had on the final outcome of the album are.

I’ve talked about this before on Ape Culture, right after I attended the first Cher Con and realized there was something different about me.  Here I was so excited to have found other Cher fans out there...finally. And yet, we didn’t quite click. I blame myself.

I categorize the celebrity obsessed into three camps: 1) those in love, clearly the worst; 2) those in illusionary friendship – obsessed with meeting the celebrity and knowing what is going on in their lives at any given moment – not healthy either due to its delusive nature; and 3) those who are obsessed with all the stuff and analyzing the stuff in ridiculously exhaustive ways. The later would be me. I would argue that this is the healthiest, aside from its conspicuous consumption aspect. But then I’m partial to my own delusions of rationality.

I’m much less interested in who Cher goes to dinner with, where she gets her tacos from or what brand of mud mask she puts on her face. I’m not going to run out and buy Dr. Pepper or the books she reads or the perfume she wears. It’s just too much intrusion on my time and identity; forget about hers. And besides, with the blog , the website, the 25 boxes of memorabilia in my parents’ basement 300 miles away in Amish Country, haven’t I put my myself and my family through enough?

Some peripherals, however, are of note: children involved in entertainment or spokesperson sorts of professions and lovers who have done creative projects with Cher...which pretty much includes them all: Sonny Bono, David Geffen, Gregg Allman, Gene Simmons, Les Dudek, and Rob Camilletti (a name I will never learn to spell) in a cameo sort of way. If they didn’t help produce any Cher product (Val Kilmer) or if no Cher product refers to them, my interest wanes.

Geffen helped transition Cher from one half of a duo to solo artist extraordinaire. Gregg Allman’s role was far less direct. He inadvertently exacerbated Cher’s tabloid presence (as if her divorce didn’t get enough ink). He also contributed to an aborted concert tour, appearances on her TV shows (as a guest or via his progeny), and an unlikely but well-made studio album. His presence and drug issues also disrupted Cher’s output and schedule during the late 70s.

But of all personal relationships, Sonny is the most crucial. He was the creative developer of Cher version 1 and 2.0. You could make another matrix of Cher’s distinct work phases based on him: 1) Cher with Sonny (early 1960s to 1973); 2) Cher rebels against Sonny (1974 to 1998); and 3) Cher post-Sonny (1998 to present – there’s not so much to rebel against in this phase and she seems almost more professionally at peace).

Sonny Bono’s Walk of Fame star in Palm Springs was rededicated in early April.  It was first placed in May of 1996, a few years before his death. A Cher fan posted the AP story recently in a Yahoo! group. We Cher freaks missed it as we were too busy fruitlessly discussing whether or not Cher will work Vegas next year and how soon we are going to be able to pre-order the new Barbie dolls.

Reading this news reminded me that In 8 months Sonny will have been dead 10 years. I can’t believe it. Apparently Cher sent an audio message to Palm Springs for the re-dedication ceremony that none of the AP reports saw fit to quote.

I wasn’t able to find a great picture of his star online...but I did pictures of his $100,000 statue which looms nearby at 155 S. Palm Canyon Drive. Here it a Monet-like Impressionistic study of the statue at different times of day.

Is he wearing a jumper? 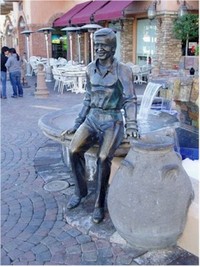 Version in the night-time 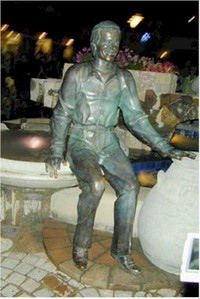