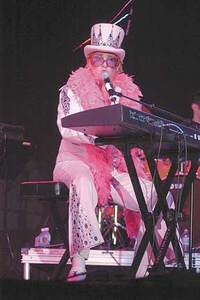 For the last few weeks I’ve been obsessed with a VH-1 show called Classic Albums. It’s similar to my obsession with Project Runway in that I love to see a project come together. I love to learn how artists of any kind make choices and decisions along the way.

Elton John’s Goodbye Yellow Brick Road was an amazing episode of Classic Albums. Many iconic albums seem labored over. Not this one. It’s like he whipped it out and went home early. One comment he made was very interesting to me as it related indirectly to Cher.

Elton said he started out only wanting to write songs with Bernie Taupin. He didn’t want to be a lead singer or be a singer at all. But they couldn’t find anybody who would record their songs. So they decided to record their songs themselves. They decided Elton would sing; but it just as well could have been Bernie. And Elton said that by the Yellow Brick Road album in 1973 he had finally come into his own singing style. Before that, he struggled to define a style.

Which is interesting because in a few earlier recordings it always seemed to me like Elton John was trying to sing like Cher. In fact, in the mid to late 1970s when I would often hear the song "Levon" on the radio, (Levon was a hit in 1972), I didn’t yet know who Elton John was and I would always be confused. Is that Cher? I don’t think that’s a Cher song. How could there be a Cher hit on the radio and I wouldn't know about it? (I was seven or eight and already a know-it-all Cher Scholar beeotch.) But yet it sounds just like Cher!

Later when I knew it was an Elton John song, I still thought it sounded like Cher.

Speaking of the Goodbye Yellow Brick Road, does anybody think "Bennie and the Jets" sounds like an homage to S&C-like acts? Or more specifically about a group like the Ronettes but with the fashion sense of Sonny & Cher?

According to VH-1 Classic Albums, the audience sounds are all fake, complete with British peoples clapping on the off-beats as apparently they are rhythmically challenged this way.

Turns out the audience cheering is from a Jimi Hendrix show! And people give Cher drama for her fake voice box bits. Hmmm. So it’s only cool when Elton fakes it...dressed in feathers.

I remember in one of the Cher Shows, she does sing the song Levon and it seems like the song is perfect for her voice, she actually sings it better than Elton. I have been looking for it all over the internet and have not been able to find it.

Hi Maria, Do you remember her singing the song on her solo show or on her shows with Sonny? There were only 29 Cher shows and you can look through the episode guide here: http://www.tv.com/shows/cher/episodes/ or the book "Cher: Strong Enough" by Josiah Howard catalogues the Cher episodes in great detail. I've never seen "Levon" listed as a song she sang on any of her shows, nor have I seen any clips of her singing that song.

Im absolutely positive that Cher covered Levon live in the 70s and it appears on at least one record of hers. Whoever denies this is a bogus Cher scholar. Sadly all traces of her doing the song have been removed fr the web and ITunes
It’s just such a bummer I must hear her version. I can find Pearl Bailey singing Savoy Truffle but no Cher singing Levon
On Itunes. She absolutely covered it

Memory is a tricky bastard. As they say...show me the money. Which album was it on? Surely wikipedia would list it. Can you find any TV appearance evidence (preferably a clip) but even an episode from a reputable TV show site? If so, I will gladly provide a mea culpa. But neither I nor the other Cher scholars I know have found it or have any memory of it.

That sounds very possible. I also think people are confused because Elton does a lot of Cher effect while singing Levon.