Notes on a Week
Star of Sonny 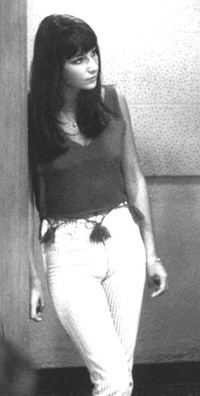 Last week, an I Found Some Blog commenter kindly posted a question. What do I think about the single “A Woman’s Story,” he asks, I’m guessing in light of all my recent Phil Spector bashing.

Well, I like the wall of sound. I really do. I appreciate it. But I also feel Cher is a wall of sound unto herself and two walls of sound can make one feel a tad claustrophobic. That said, this single and I go a long way back...

The first time I heard the opening bars was in background footage of a documentary that had Sonny discussing his feelings about Phil Spector...the same early 80s Spector documentary I mentioned a few blog posts back. Not only was it a Cher song I had never heard before (and I thought I had all the albums by then); but it sounded crazy-cool. Haunted. Unlike anything I had ever heard her do. And she’s recorded in every conceivable style, so that’s sayin' somethin'.

It was the mid-80s and I was 15 or 16 years old. I had no Cher community. All I had were record guides from Waldenbooks at the mall. I would scribble down record lists on the back of envelopes without paying for the books. This was before the big chain bookstores encouraged you to sit for a spell and read all day.

There were no good Cher discographies or biographies out yet. The J. Randy Taraborrelli book might have been out but I hadn’t read it yet. So I was on the lookout for the song but I didn’t even know the name of it.

Soon after I got my driver’s license (the summer of 1986), I was still terrified to drive on the highways. So one Saturday afternoon I took a very slow, surface-street drive across St. Louis to make it to the south county used-record stores. I found the 45 sitting innocently in a huge 45 bin. I bought it for $1.50. Can you believe it? I paid $75-100 for similar Warner singles years later on ebay. When I got home I was immediately in trouble for making everyone late for an Olan Mills family portrait sitting. But I didn’t care because I loved my trip to get that 45. I was finally breaking out and finding hidden treasure!

The song’s writing credits are Spector-Tempo-Stevens. Which looking back now, the lyrics feel slightly woman-hating, in a sort of “I’m-trying-to-be-sympathetic-but-I’m-showing-my-hidden-prejudices” sort of way. Especially depending upon how you interpret “woman.” Is this woman the universal woman or one particularly unusual woman? In any case, woman equals whore. And if you’re following the Spector trial, he has a tendency to generalize all women as whores. His high school girlfriend claimed he had jealousy issues. Which links quite easily to “if you sleep with anyone other than me you must be a whore.” It’s disturbing how far we can take this train of thought.

But let’s separate these latest unsettling allegations from the song itself, a ballad about a lonely hooker. What an awesome opening: shrill, creepy backups until Cher’s voice comes rolling in.

I would almost think the wall of sound would suits Cher’s voice; it tries to coat her vocals in sound. But in this case, it’s too loud. Cher sounds a bit unenthusiastic, mumbling a few words. Then again, Cher might be performing a very convincing depressed character.

The biggest problem is that the song sounds too dated for the mid 70s. It sounds very late 60s which was such a specific sound remarkably tied to its time. But then even the backup “ahs” in the middle of the song are too clunky for the late 60s.

I both love and hate this song's oddness, its tripped out atmosphere; but I’m glad this wasn’t the sound that Stars turned out to be. “From now on I say hell no.”

The B-Side provides us with more Spector: “Baby I love You,” a remake (and some say dis on the Ronnie Spector original). Again, another song on drugs. But I still love parts of it. I love the ethereal texture of the introduction, the heartbeat bass, the vulnerable way Cher sings the verses, not teenage-frantic like the original. A great quiet performance by Cher (lovely falsetto). Kim and Kath would say “It’s nice. It’s unusual.”  I even love the outro with the free-style guitar.

But then by the time the chorus comes around, you feel like you’re listening to molasses. A musical goopy mess. The song feels like a single-engine plane that can't quite take off. Double Darn It.

Then there was also “A Love Like Yours” by Cher and Harry Nilsson. Same story: dated, maddeningly-slow, messy. I can’t even understand what they’re singing. Plus it seems like a rip off of Dylan’s  “Knocking on Heaven’s Door.” The whole thing is labored, plodding and lifeless; although it almost sounds like Cher is screeching at the end.

Speaking of Phil working with Cher, we can’t forget her first studio performance, “Ringo I love You,” a bizarre sounding thing, a garage-band guitar, Beatlesque tempo and yeah yeahs.” And still, the song has no omph, it’s so slow. A flat, Frankenstein vocal performance, too.  This was an unfortunate way to introduce Cher to the public. Many thought she was a man singing. But I think she sounds more exotic than masculine.

The best wall of sound Cher song, in my humble opinion, is “Dream Baby.” And this was a Sonny Bono interpretation of the wall. I only have a stereo version on my iPod. Does anybody out there have the mono version? What’s the difference?

Anyway, Sonny captured a Ronettes-like sound except Cher’s makes it a Gothic girl group. Her 60s voice can sound amazingly innocent and experienced at the same time. It’s a great, simple vocal. And Sonny does the right thing by tempering the wall of sound so as not to compete with Cher’s voice. The percussion sounds cleaner and the sax is fun. It’s like a little wall Cher can sit on and kick up her feet.

Wow, except for maybe a few tracks (Love Hurts, Stars, Mr. Soul), I like A Woman's Story/Baby I Love You/A Love Like Yours better than most of the Stars album. I just think there's so much mastery & mystery in Spector's production. Much more so than what Jimmy Webb did for Stars. Plus I'm a sucker for all that wall of sound/reverb. Phil produced a great album for Dion in 1975 (Born To Be With You) which I just discovered a couple years ago, that makes me truly long for what could've been a whole album by Spector and Cher.