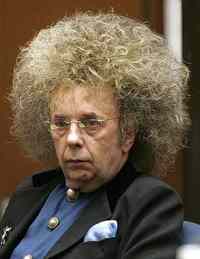 If you've been watching TV at all, you can't miss the latest court room news on the Phil Spector case. The latest evidence that prosecutors are submitting is testimony from a woman at Joan Rivers' Christmas party. Spector was there allegedly ranting about all women deserving to die by a most violent means. Which if you've read Ronnie Spector's biography (which I did because Cher wrote the foreword), these latest accusations of violent bullying aren't exactly surprising. One wonders if Cher witnessed much of what Ronnie went through. Cher apparently was pretty feisty with Phil during those recording sessions at Goldstar Studios.

Then again, maybe Phil Spector, as freakish as he seems to us, didn't frighten Cher all that much. She was probably exposed to a plethora of characters, quirky and unsavory, both in the family and growing up on the streets of LA. Maybe that gave her the cojones to survive in the cut-throat music biz after Sonny's exit stage left.

There was supposedly an incident with Phil and a gun and Cher during the 'A Woman's Story' sessions, which led to Geffen finding a new producer for (what became) the Stars album.