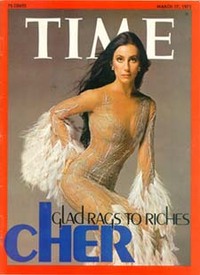 By the way, Cher should not cover this song. "I can’t seem to seize the light! I’ve done everything but I can’t get it right." You've already played it out in your head, haven't you?

Anyway, I found some interesting Cher-links this week.

My google blog search brought up this odd page: thin celebrity photos posted to inspire extreme dieting. I love the 80s Cher Jack LaLanne photos found here (and the awsome other-version from the Vogue/Dark Lady album cover) however further research showed this forum site was part of a larger "Pro-ana" site which is short for "pro-anorexia.

"Welcome to the Pro-Ana Forum! Pro-ana is a largely Internet-based movement which views the eating disorder anorexia nervosa as a lifestyle choice rather than a medical condition."

There’s a thread on the group called "threats to kill oneself" and "are you lacking in energy."

Sigh. I would be open to this assertion except personal experience tells me this death-defying lifestyle choice makes your family and friends cry.

Lots of kewl skinny Cher pics have been posted and oogled over at Thinspiration.

Here’s a link to the Time Magazine article from March 17, 1975. This is a very important piece. It was a whirlwind of commotion on the Cher timeline. Her solo show was just starting and she was doing interviews to re-introduce herself to a country who wanted her to go back to Sonny so they could watch The Sonny & Cher Show again because that's the show they LOVED. The dress shown on the cover caused a stir when she showed up wearing it at a The Metropolitan Museum of Art in Manhattan and the press thought it showed more skin than it did.

Then there was the fact that a celebrity was appearing on the cover of time Time Magazine. Unless there’s a scandal occurring, this isn’t even done that often today. Time rarely calls out a celebrity phenomenon. In 1975, it was even more rare and it shows Cher was a legitimate cultural Phenomenon

with a capital P in 1975. She was…HOT. She was called out as the most photographed woman in the world then (and this is with Jackie O running around), she had two teen-style magazines dedicated to her that year and and two pulp biographies published, one by George Carpozi (Cher) and one by Vicki Pelligrino (Superstar of the 70s….Cher!). She was the IT girl of 1975.

The article in Interview Magazine, December 1998 is not as great as the Warhol issue of Interview from the early 80s (with that wow-wonderful Richard Bernstein cover – I had it framed), but it’s still interesting in that she talks about Sonny, motherhood, biggest fears, and an odd little story about how she willed together the cast of Tea with Mussolini. She also has some interesting comments at the end about the process of being interviewed.

Actually, that Interview magazine interview is from 1998, not 1988. She was also interviewed in Interview in Dec. 1974....would love to read that one if you can find it. The photo that became the cover of STARS was used for the cover of that issue.

Yikes! My typo-bad. Thanks for catching it!